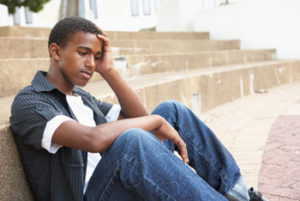 Kids who are considering the dark road of suicide will many times tip you off by giving signals and signs. The last two blog posts looked at the first two (emotional and physical) categories of signals and signs that we can be looking for. Today, we look at the third category known as behavioral cries.

Teens who struggle with depression and suicide sometimes decide to become involved in some strange and frightening new behaviors. Here are a few. . .

Accident proneness can become a conscious or unconscious attention-getting device for teens who desperately want someone to notice them. Teens who feel shut off from others find the attention they receive after an accident to be a form of immediate reinforcement. These cries for attention can also be cries for help.

Acting out or other melodramatic behavior is another common attention getter. I remember one girl who always acted like the world was coming to an end. When she felt that her friends were starting to ignore her, she would quickly step on stage and respond like a terrible actress to some new crisis that she had thought up. It didn’t take long for her friends to catch on to her act. As her fantasy world came crashing down, she would move on to a new circle of friends that would respond in the way she wanted. Sadly, this was a cry to be noticed, loved, and cared for by a girl whose father had emotionally rejected her, leaving her depressed and feeling worthless.

A preoccupation with violence and unusually aggressive behavior are clear signs that something is wrong. Some suicidal teens will fight, yell, break things, and throw objects during increasingly frequent fits of rage. Some will be mesmerized by movie and television violence, renting and viewing violent films. Others will purchase or attempt to build weapons.

Self-destructive behavior and involvement in dangerous activities are signs that a teen may have little or no regard for their personal safety or life. Many suicidal teens will live life on the edge by driving fast, playing dangerous games with weapons, or playing chicken with their cars and bikes. Any sort of high-risk activity of this type merits attention.

Promiscuous sexual behavior is often an attempt to sedate strong feelings of failure and depression. Kids who see themselves as worthless, unloved, and rejected will look for acceptance and love through sexual intimacy.

Drug and alcohol abuse has already been discussed as a factor contributing to suicide. While their abuse appears to contribute to suicide by aggravating and exaggerating depressed feelings and suicidal tendencies, their use can also point to the presence of depression and suicidal feelings.

Sudden rebellious and disrespectful behavior towards parents, teachers, and other authorities may indicate that a teen has decided to take their fate into their own hands rather than listen to the wisdom and advice of those they may have respected at one time.

A drop in grades and increased truancy are not uncommon when a teen is preoccupied with so many problems that they find it impossible or undesirable to care about schoolwork.

Teens who think about killing themselves will sometimes become preoccupied with death. They may write poetry or stories focusing on death or other morbid themes. Their musical tastes may change and lean toward an interest in music and media that portray and glamorize hopelessness and death. Their preoccupation with death may even lead them to dye their hair and dress in black.

Preparing for death is a clear sign that a teen has decided to commit suicide. Many teens who have made the decision will begin to give away valued personal items to close friends or family members. They will say good-bye and take care of other personal business. And they will acquire the means by which they intend to kill themselves (rope, guns, pills, etc.).

It seems strange that this last behavioral cry has to be mentioned, but the fact that many parents don’t hear this loudest of all screams warrants its inclusion. A suicide attempt should not be brushed off lightly. Your teen is crying for help and wants you to get involved in dealing with their issues and problems.