So it’s been one-week since a deeply-troubled and broken soul wreaked havoc on a school in an act that has sent unimaginable ripples of pain and brokenness near (family, friends, community) and far. In the week since, a grieving community has had to endure a series of funerals for lives that ended abruptly and way too soon. And almost immediately, discussions that must be had began filling social media in ways that seem polarizing, politicized, and way too simple. 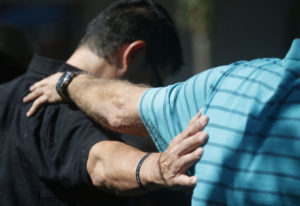 Once again, I’m left with head-spinning confusion as I try to process and make sense of what happened at a South Florida high school last week. I think we’re making a huge mistake if we believe the antidote to manifestations of evil can be found in a simple answer or solution . . . be it gun-control, better mental health screening, armed school resource officers, improved FBI surveillance, or any other of the quick answers popping up all over social media. Yes, these matters all need our attention and we can/must do better, I’m sure you’d agree, at all of them.

First, manifestations of evil are always complex in source. Nature (human depravity) and nurture (multiple influences/causes rooted in omission and commission) are always multi-faceted and unique to every person and every situation. Sadly, our tendency to seek out easy explanations can lead us into the trap of offering up easy explanations. There are none.

Second, just as manifestations of evil are complex in source, so are the solutions. Again, it’s not a one-size-fits-all. We tend to simplify because we want fixes. Humanity has been around for how many millennia? And how is it that we haven’t yet fixed what’s broken? If simple solutions were that simple, we would have already had this thing figured out.

Fourth, as Cornelius Plantinga reminds us in his book Not the Way It’s Supposed to Be: A Breviary of Sin, “sin is disruption of created harmony and then resistance to divine restoration of that harmony.” God’s shalom has been vandalized. . . and it will continue to be vandalized until The Rescuer makes His final appearance to usher in the new Heavens and new earth. . . and shalom is restored! Until then, as Joseph Sittler once observed, we find ourselves walking through the valley of death just once. . . but we spend our whole lives in the valley of the shadow of death.

Finally, we can rest assured that because God hates sin, God hates what happened last week in Florida. He hates what led up to it, shaping (or mis-shaping) the mind and heart of a young man who wreaked havoc and heartache in just a few moments. He hates what it did to individuals, families, and a community during those few moments and the fall-out that won’t end anytime soon. And, He hates the hate that’s followed on the part of a polarized nation.

I can’t seem to find on social media that easy human solution that serves to convince me that things can be fixed as long as we draw breath in this world. I can’t find an easy explanation for what happened and why. But I can rest in something bigger than me and beyond my finite self. Things are not the way they are supposed to be. And the fact that we all know that speaks to the fact that the longing we feel does point both backwards to the shalom we’ve lost and forward to the shalom that we hope for. And until then, those of us who trust in God must seek and live that shalom. . . as incomplete as it may now seem to be.