Televised sports found its way onto my agenda last night, with me engaging in a flip-fest between the MLB All-Star Game, the Tour De France, and Cornhole (yes. . . Cornhole! . . . televised now as a sport on ESPN!). 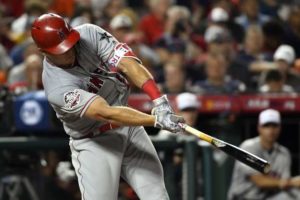 While tuned to the MLB All-Star Game I saw the Angels’ Mike Trout hit a 3rd inning home run. In a nod to how MLB is trying to market itself aggressively these days, center-fielder Bryce Harper was mic’ed-up, on the field, and chatting with announcer Joe Buck when Trout hit his blast. As Trout was headed back into the dugout after rounding the bases, Buck mentioned to Harper that Trout is the best player in Major League Baseball. . . a statement that I thought might generate some push-back from Harper based on Harper’s own view of himself. Harper politely called Mike Trout one of the best in baseball right now.

While flipping back to Cornhole (ashamed to admit this), I got to thinking about how all of us fall somewhere on the spectrum between pride and humility. None of us is immune, especially in a social media-saturated world where there’s a voice constantly prodding us to promote ourselves. . .  or suffer the consequence of being left behind.

This morning, I encountered a story on ESPN.com that affirmed this never-ending and always-increasing pressure: “Rob Manfred: Mike Trout Limits His Popularity Because He Won’t Market Himself.” The article offers a peek into the collision of opposing values between the MLB Commissioner and one of baseball’s best players. The article says. . .

“Player marketing requires one thing for sure — the player,” Manfred said earlier in the day. “You cannot market a player passively. You can’t market anything passively. You need people to engage with those to whom you are trying to market in order to have effective marketing. We are very interested in having our players more engaged and having higher-profile players and helping our players develop their individual brand. But that involves the player being actively engaged.”

Manfred said Trout chooses not to spend his downtime marketing.

“Mike’s a great, great player and a really nice person, but he’s made certain decisions about what he wants to do and what he doesn’t want to do, and how he wants to spend his free time and how he doesn’t want to spend his free time,” Manfred said. “That’s up to him. If he wants to engage and be more active in that area, I think we could help him make his brand really, really big. But he has to make a decision that he’s prepared to engage in that area. It takes time and effort.”

“Yeah … no,” Trout said in response after exiting the All-Star Game. “I keep telling you guys, I do as much as I can. But it’s a long baseball season. I got to pick and choose when I want to do things and go from there.”

The zeitgeist tells us that we are brands and that we must market ourselves. It seems that Mike Trout, refreshingly, marches to the beat of a different drummer. I think about the implications here for those of us in youth ministry where the zeitgeist increasingly tells us to do the same. I love what my friend Rich Van Pelt once passed on to a room full of youth workers: “You take care of the depth of your ministry and let God take care of the breadth.”