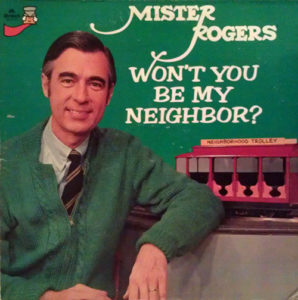 Have you seen it yet? If not, you should. The last film I viewed was the documentary biopic of Fred Rogers, Won’t You Be My Neighbor?  Lisa asked me how it was. “Slow,” I said. “Just like his long-time show.” When I said it that way, it wasn’t a criticism, but a compliment. And just like millions of kids from multiple generations, I found Fred Rogers and his story to be sensible and soothing. . . a reality we’re drawn to because, whether we know it or not, that’s what we’ve been made for. . . but which is rarely given or even sought.

There were two moments in the film where Rogers spoke with an almost angry conviction and passion.  His words were so timely and important as a response to our current spirit and mood of the cultural times that I scribbled furiously to get them written down.

The first was in response to what everything in children’s media has become, which is, almost the exact opposite of what Rogers was putting on the air. As he criticized that kind of stuff for what it does to kids, our culture, and our collective future, images of violent cartoons, kids getting slimed, and cartoon silliness flashed across the screen. The contrast between Rogers’ words and the imagery was stark. Rogers said, “I’ll tell you what children need; they need adults who will protect them from the every-ready molders of their world.” That’s who we’re supposed to be, right? It was convicting, for sure.

Rogers’ words brought two thoughts to mind regarding who we are as people in youth ministry. On the one hand, we need to teach cultural discernment. . . which means we must be there as discerning people ourselves. What is it in media culture that’s good, true, right, and honorable? On the other hand, we need to think about the forms we employ. In our world of youth ministry, we often focus on the externals that attract and draw, rather than on the Gospel that will grip, transform, and keep kids. There’s nothing wrong with having fun. But there’s a message and outcome that results from the forms we choose to employ. An imbalance in our forms and message will result in our students having imbalanced lives. Perhaps we need to be a little more careful, thoughtful, and balanced.

The second moment in the film that captured me was when Rogers said, “Love is at the root of everything, or the lack of it.” Of course, the love we need to communicate is one defined by a balance of grace and truth. Sadly, if we err today, it’s on the side of grace. . . which is an over-swing and perhaps a reaction to a recent history of an overemphasis on truth void of grace. . . which is “legalism.” Fred Rogers’ words brought to mind something that my friend Paul Warburton, a green-house owner, once said to me about a plant I just couldn’t get to grow: “A plant flourishes when all it’s needs are being met.” Our kids are the same. And just as flourishing happens when a child gets what she needs, the opposite is true when those good things are withheld and evil takes its place.

The implications for youth ministry are quite clear here as well: we need to bombard our children and teens with love that is marked by grace and truth.