Recently on a Facebook youth ministry group page, a youth worker posted a question we should all be asking from time to time. It was a question about self-promotion. . . which in our social-media-saturated world is a huge temptation for everyone. Yes, our kids clamor to be YouTube celebrities. Those of us who are older might share nuanced aspirations, but we all have to battle the demon of pride. That youth worker’s question sparked alot of helpful conversation, and occasioned the upcoming release of an episode of our Youth Culture Matters podcast that will address the topic (stay tuned!).

That conversation has me thinking about pride, humility, lessons learned as a child, and the career of a baseball star who hung up his cleats a few weeks ago.

If I remember correctly, it was while watching the old Romper Room TV show that I learned at a young age to “do be a do-bee” and “don’t be a don’t-bee.” The meat on the bones of those little songs and rhymes were character lessons on virtuous behavior.

My kids grew up without Romper Room, but television fed them lots of lessons on character and appropriate/acceptable behavior. As a dad, I quickly learned that it was important to be looking over their shoulders to see how what they were watching was schooling them for life. Sadly, looking over the shoulder has become more and more necessary, as the “do’s” and “don’ts” have become quite muddled since shows like Romper Room went off the air. It’s become harder and harder to find good positive role models whose lives evidence positive character and virtue. 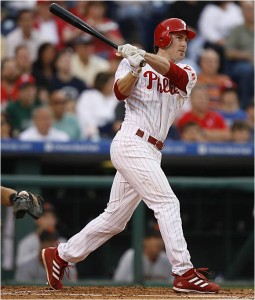 While the only consistent model for our behavior is Christ, we can from time to time point to examples of people who go against the flow of the status quo to model in a breath-of-fresh-air sort of way character that is worth aspiring to. A few years ago our local paper ran an article about one of those people and the valuable life lessons he learned from his Dad which continue to inform the way he lives today. According to the way most high-profile sports superstars live self-absorbed “look at me” lifestyles today, this guy went about his business quietly and without flair. If you’re a sports fan you no doubt know the name Chase Utley. The quiet and unassuming second basemen who played most of his career with the Philadelphia Phillies was such a good player that more fans  sent their all-star votes his way  a few years ago than in the direction of any other player.  Whether winning or losing, homering or striking out, or fielding or missing a ball (rarely!), Utley’s demeanor never changed. There was never any showboating. When things didn’t go his way, there were not tantrums, anger, or excuses. The more I watched him, the more amazed I was by the way he played the game. The fact that I’m amazed is a sad commentary on the state of our culture. Utley’s behavior and approach to the game should be commonplace. Because it’s not – sadly – it stands out.

Back to Utley and his Dad and the article our paper ran on Father’s Day a few years back. . . . it seems that when Utley was a little boy playing ball in his home state of California, he complained to his father about a fellow player who did quite a bit of show-boating on the field, and bragging off the field. Utley’s dad simply shared a lesson he had learned from his high school guidance counselor. The lesson was this: “If you’re really good at something, you don’t have to tell people. They will tell you.” And so, Chase Utley focused on pursuing excellence at his craft. You know by the way he played. Not by what he said. What I liked about Chase Utley – and what I liked to point out to my kids about Chase Utley – was his humility. It’s refreshing because that’s the way it’s supposed to be.

The writer of Proverbs says that “humility comes before honor.” Jesus reminds his followers that “whoever exalts himself will be humbled, and whoever humbles himself will be exalted.” And Peter reminds Christ-followers to “clothe yourselves with humility.”

We are all sinners saved by grace. Anything good we have or do is a gift of grace. I am reminded this morning that in my home, my church, my community, and my world I am nothing. . . and if I am something, it is only by the grace of God. So with the Puritans we should pray, “Help me to humble myself before Thee by seeing the vanity of honor as a conceit of men’s minds, as standing between me and Thee.”

Youth workers. . . I hope this is helpful. And if you would, ponder these oh-so-true words from Christian thinker and cultural critic Os Guinness: “In working out our callings, we are to perform for one audience, the audience of One.”