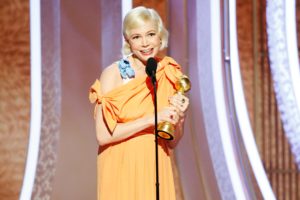 It’s taken a couple of days for me to sort out the mixed bag of thoughts prompted by what happened at the 2020 Golden Globes Awards show last Sunday evening. Embedded in the distribution of trophies were the expected politically-charged statements coming from this year’s lineup of award winners. The words spoken by two celebrities, in particular, stand out. . . those from host Ricky Gervais, and those from award winner Michelle Williams. Gervais opened the show by setting some boundaries. Williams crossed them.

What transpired was significant for the simple reason, as we always say here at CPYU, that culture is both a map and a mirror. It is both directive and reflective. It tells us how to live our life in the world by shaping the beliefs that then guide our behaviors. Culture also shows us what beliefs have already been embraced which are in turn guiding the behaviors which we see. Awards shows are cultural artifacts that typically serve as pretty straightforward windows into who are, what we believe, and how we live.

At this year’s Golden Globes, what hit me the hardest was Williams’ acceptance speech (see below) and her forceful and shameless plug for abortion. In fact, she attributed her ability to receive her award to a decision she made earlier in her life to terminate a pregnancy. Her justification for taking the life of her child was stunning. . . and she stated that justification while standing there in front of that crowd with another human being growing in her womb.

For the last few years I’ve been unpacking expressive individualism (thank you Robert Bellah and Charles Taylor) as a macro-trend in today’s culture with audiences of youth workers, parents, and pastors. While many in our culture wouldn’t be able to state in so many words that being true and authentic to one’s fast-changing personal whims and wishes is their highest value in life, the way we choose to live doesn’t lie. It tells the real story. The wave of functional expressive individualism continues to grow, swallowing up young and old alike. . . inside and outside the church. . . onto a path that leads away from human flourishing and into deep darkness.

When we embrace behaviors and underlying beliefs void of shame and full of pride . . . in fact when we preach those things as evangelists of expressive individualism. . . we are lost. If you want to see an example of this, just watch Michelle Williams’ short speech. . .

And so, we must pray. . . for our kids. . . for the celebrities who lead them. . . and for our culture. Talk to your kids about the speech. Get a sense of what your kids believe by asking them for their response to Williams’ words. Talk to them about the value of all human life. Talk to them about how the path to human flourishing and freedom travels a narrow way where crosses are carried as we are yoked to the Savior.

Lord, save us from ourselves.