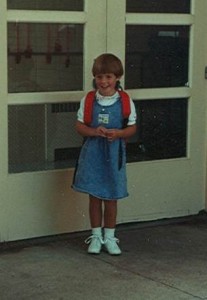 School is starting. This year, some of our kids are heading to a building.  Others are going to school online. Still others are being home-schooled out of necessity rather than choice. I love looking at all the first-day-of-school pictures that are popping up on Facebook. Because I remember taking many of those photos myself. . . like the one at the right of Bethany (now an elementary school teacher herself) ready to cross the threshold for her first day of Kindergarten 27 years ago! I know that there’s always some nervousness mixed in with the excitement. . . maybe even some fear. . . in the heart of the one taking the picture.
Because I was always concerned for the physical, emotional, and spiritual safety of my own four kids, I would often times pray for them during the course of the school day. I knew that either they or the people around them might make choices that would be unwise, dangerous, sketchy, or even immoral. I wanted them to make choices that were wise, safe, full of integrity, and God-honoring. So, I would pray for their protection. I’m doing the same for my grand-children these days.
My prayer would typically include a few lines about God’s protection over, under, in front of, in back of, and on either side of them. In recent years, I discovered that I was praying words similar to those from what’s oftentimes called “St. Patrick’s Morning Prayer,” a short version of which I’ve adapted below. I’ve changed it from the first person to the third person so that you can, if you choose, use it to pray for your kids.