This week, I’m posting a three-part series on the Sex-Positive Movement, a trending and powerful influence on all of our kids. Today, Part 1.

Almost thirty years have passed since an interviewer asked Madonna if she saw herself as “a kind of a sexual missionary.” This was her response: “I suppose that’s one way to look at it. . . Sex is the metaphor that I use, but for me really, it’s about love. It’s about tolerance, acceptance, and saying, ‘Look, everybody has different needs and wants and preferences and desires and fantasies.’” 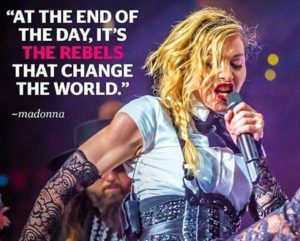 If you spent any time at all listening to Madonna in order to discern her worldview, it was abundantly clear that she was living, singing, and promoting what philosopher Charles Taylor has called expressive individualism. Increasingly an element of the dominant worldview in our culture, expressive individualism holds “authenticity” as a high value. In other words, it is believed that to be truly happy and free, one must be authentic to one’s personal wishes, feelings, and desires. Taylor says it is the belief that “each one of us have his/her own way of realizing our humanity, and that it is important to find and live out one’s own, as against surrendering to conformity with a model imposed on us from outside, by society, or the previous generation, or religious or political authority.”[i]

Our kids may have no conscious clue about their expressive individualism, but they are being encouraged to live it out in every area of their lives. We hear it in phrases like “You be you”, “Just follow your heart!”, “Be true to who you are”, and “Find yourself.” Perhaps the most obvious place where we encounter these beliefs and behaviors in today’s world is in the realm of sex, marriage, and gender.

The worldview Madonna embraced and propagated through her music and presence are no longer fringe notions held by a small-yet-vocal minority. Instead, this worldview which is built on the foundation blocks of relativism and self-rule is not only majority opinion, but the prevailing set of assumed cultural beliefs that are guiding the behaviors of young and old alike.

Still not convinced? Just look around at film, music, books, television, and the content that’s so prevalent online. One recent and sobering example is pop star Cardi B’s hit song, “WAP”, which was released just a little over a month ago on August 7, 2020.

It starts with the song’s title, which is an acronym for a vile term for female genitalia that I can’t even bring myself to spell out here. The song’s title relates clearly to the lyrical and visual themes of the song. The video celebrates and promotes a version of female sexuality that is raw, expressive, table-turning dominant, and as one affirming critic has said, “Class-A filth, a torrent of horny one-liners. . .”[ii]  It’s a sign of the times that music critics are loving it, and the music-consuming population loves it as well. Music listeners haven’t flinched. Instead, they’ve applauded. “WAP” has topped the global Spotify chart, debuted at #1 on The Apple Music songs chart (highest debut ever by a female artist), and debuted at #1 on the Billboard Hot 100 chart. The video garnered well over 26 million views during its’ first 24-hours.

You might ask, why has there been little or no mainstream pushback on a song that New York Times’ music critic Ben Sisario says is “perhaps the raunchiest No. 1 single in history.”[iii]? It’s because the mainstream is celebrating a message that’s already deeply entrenched in our culture’s collective sex-positive beliefs and behaviors. Cardi B is not offering up ideas about sex and sexuality that are something new. Rather, she’s telling us who we already are. . . and that fact means we need to wake up and respond.

In Part 2. . . What does the Sex-Positive Movement believe?

In addition, check out this helpful article from our friend and author, Dr. Leonard Sax, on Cardi B, her song, and what it means for our kids.