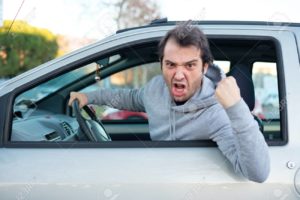 One day. . . a day back when kids didn’t have to be in car booster seats until they were-8-years old. . .  my then four-year-old son Josh and I were coming home from a trip to the mall. The kid hated how confining seat belts were and we were constantly telling him to buckle back up. We were passing through an intersection just a few blocks from our house when I noticed a car coming at us from our left. The car was traveling so fast that I knew it was going to run the stop sign. In an effort to avoid a collision, I stomped on the brakes and skidded to a halt. As soon as Josh’s little doubled-over body snapped back to an upright position, I decided to turn the incident into a little lesson called “This is why we tell you to wear your seat belt!” But before I had a chance to say anything, Josh looked out his window at the other car as it continued down the street. Then, he shook his fist in the air towards the guilty party and yelled, “You Idiot!”

I wondered, Where in the world did he ever learn to talk like that to other drivers?!? I knew he had been spending a lot of time in the car with his mother. . . and then it hit me. He was responding to the other driver in a manner that he had learned. . . from me.

All right. I’ll admit it. I tend to regress a little when I’m out driving. My son was only following the behavior modeled for him by his father. Today, Josh is a grown man. But when he was younger, there were many occasions where I had to reprimand him for living out my bad example in his life.

Do you want your children and teens to grow up to be strong in their faith and able to handle all that our world is throwing at them? Then ask yourself, What kind of example am I giving them? Who you are as a parent plays a more significant role in determining what your children will become than any other single factor. You’ve got to be who you want your kids to be because they will follow your example and wind up right were you are. Better yet, you’ve got to be who you were made to be – a divine image-bearer who exists to glorify God 24/7 –  so that your kids will learn that that’s where they belong, too.

We all have wishes, dreams, hopes, and desires for what our children will become. When you dream about the spiritual future of your teens, don’t forget that they are learning what place spirituality and faith should hold in their life. . . . from you. Eugene Peterson describes it this way: “A parent’s main job is not to be a parent, but to be a person. There are no techniques to master that will make a good parent. There is no book to read that will give the right answers. The parent’s main task is to be vulnerable in a living demonstration that adulthood is full, alive, and Christian.”