Until last night, I hadn’t watched the news since the end of October. The bickering, bantering, posturing, and lack-of-truth-telling on both sides had worn me out. The unwillingness of folks. . . even people of faith. . . to pursue clarity and understanding by taking a compassionate pause was getting to be too much. Angry outbursts along with knee-jerk cancel-culture responses are increasingly the order of the day. And, knowing my own broken self, I didn’t want to get swept up in the frenzy to the point where I was doing the very thing that I despised. That can happen, which I’m sure you know.
But after two-and-a-half months, the news switched on in our house last night. I had picked up my phone to make a call to the friend when a news story popped up about some kind of unrest in D.C. Once the news was on, I started surfing quickly between stations as I felt like I was on some sort of out-of-control balance board and trying to find the stability of something in the more reasoned (and I trust truthful) center. When after just a few minutes I realized that everything was looping and nothing new was going to be known, the TV was shut down. Sadly, I was dropped into the accusatory shouting match again when I went to check something on social media. 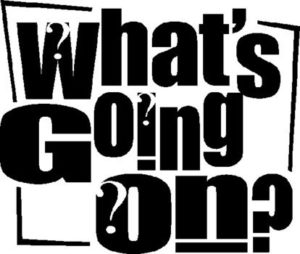 I’ve struggled a bit with my decision to move away from news outlets over the past weeks because of my commitment to the importance of starting my day with the Bible in one hand and the newspaper in the other. If you’ve ever sat through a class or seminar on faith and culture with me, you know that I have pushed that practice for decades. But the newspaper, whatever form it takes in today’s world, has to be trusted. I have chosen more recently to keep both hands on the Bible. I haven’t regretted that move at all. It’s been most helpful in far too many ways to explain. I haven’t totally forsaken my responsibility to listen to the world. I’ve chosen to do that by listening to the primary voices who are revealing belief and behavior trends through their stated beliefs and lived-behaviors. I have also pursued opportunities to sit at the feet of trusted men and women of Issachar (I Chronicles 12:32), who themselves continue to develop keen skills for discernment as a return on their investment in spending time in God’s Word. These are the people who take care to know the times and know what the church should do. I’ve mentioned names like David Wells, Os Guinness, and Carl Trueman several times before. In more recent days I’ve come to appreciate the next generation of Issachararians (is that a word?), including people like Alisa Childers.
Our responsibility as followers of Jesus is to observe what’s going on, to know what should be going on, and to take the necessary steps to live as salt and light in the culture. . . counter-culturally. . . to the glory of God. Francis Schaeffer asked this question decades ago that we need to be asking today: “How Then Should We Live?”
You may or may not have noticed this before, but there’s a four-paneled painting, “God’s Story”, at the top of this blog page that provides context while pointing us to the answer. Painted by David Arms, this painting hangs both in my home and in my office. It serves as a visual reminder of the underlying story that’s “going on” all around us, along with my place in it.  (If you haven’t read the narrative Scotty Smith wrote for this painting, look to the right side on this page and follow the instructions to click on the image to read the narrative.)
If we understand, correctly, that the Bible is a four-chapter grand narrative following the flow of Creation to Fall to Redemption to Restoration, then we know that we, as God’s redeemed representatives living in this fallen world, have been called to seek and live “Shalom.” That word “Shalom” describes the state of Creation before the Fall. Everything was perfect and harmonious as God intended it to be. It was a state of universal flourishing. Then came our rebellion (Chapter Two). We know that God will restore all things on that glorious day when the page turns to Chapter Four. But until then, God’s people, now living in Chapter Three, are called to seek and live his creational intent (Chapter One’s “Shalom”) exhaustively and consistently.
C.S. Lewis offers these words in “Mere Christianity”: “For Christianity is a fighting religion. It thinks God made the world – that space and time, heat and cold, and all the colors and tastes, and all the animals and vegetables, are things that God ‘made up out of his head’ as a man makes up a story. But it also thinks that a great many things have gone wrong with the world that God made and that God insists, and insists very loudly, on our putting them right again.”
To be a Christian does not mean that I have been saved. . . period. It does not mean that I can move forward with confidence to choose to live however I desire to live. The Christian is both saved by Christ and a servant of Christ.

Perhaps the first 20 verses of Ephesians 5 are most appropriate to hold in our hands this morning. And today’s Youth Culture Today 1-minute podcast offers a related challenge. . .