“I dare you. . . !” I can’t tell you how many times those words were uttered among my circle of adolescent peers during the years when we were going through middle school, high school, and college.

The dictionary defines a dare as defying or challenging someone to do something that proves their courage. Our dares typically involved things like walls, fences, heights, girls, BB guns, door bells, teachers, and a variety of things that moved on wheels. Looking back, I’m fairly certain that our dares. . . both issued and attempted. . . proved our stupidity more than they proved our courage. In many ways, we were the precursors to Johnny Knoxville’s highly popular Jackass.

Good for me, I think, that I grew up in a world void of social media. . . which is the exact opposite of today’s world, where our vulnerable, easily-influenced, and impressionable kids are able to issue and answer dares for the entire world to see. It’s one thing to act on a dare when a handful of your neighborhood friends are watching. But add smartphone cameras and social media to the mix and you are tempted to more quickly take the dare in the hope of expanding that coveted online following.

The advent and popularity of the TikTok online video app has really ramped up our “dare culture”. In today’s world, we speak of these things as challenges. If one person takes the challenge and posts it online, chances are it will go viral pretty quickly. And when it does, the temptation and willingness to engage in risky behavior circulates just as fast, if not faster. 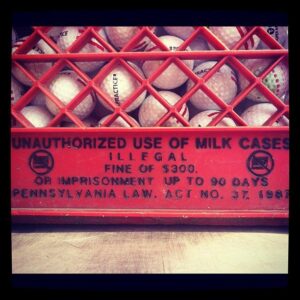 The latest of these viral TikTok phenomena is what’s known as The Milk Crate Challenge. Contrary to what us older folks might think, this isn’t about walking away from the back of your local quick mart with empty plastic milk crates waiting to be picked up and reloaded by the local dairy. You know, those milk crates stamped with “Unauthorized use of milk cases is illegal: Fine of $300 or imprisonment up to 90 days.” This new Milk Crate Challenge does involved securing a number of milk crates. . . which is illegal. . . but it’s about more that that.

The Milk Crate Challenge went viral on social media (TikTok, Instagram, and Twitter) back at the beginning of August when a video was posted of two guys walking on milk crates. Pretty soon, millions of viewers were watching videos and then making their own videos showing people stacking and then trying to balance as they walk across the precarious mountain of milk crates. Of course, our obsession with what the Germans label as schadenfreude (pleasure derived from watching another person’s misfortune) now has kids obsessed with watching people fall off the milk crates, many times with great gusto. And it’s that same obsession that has hosts of kids trying to get watched by posting their own Milk Crate Challenge videos.

Those who engage in the Milk Crate Challenge are setting up pyramids of milk crates in a configuration of steps going both up and down. The videos, some of them garnering millions of views, feature participants taking the challenge in front of both small groups of onlookers in a backyard, or large groups gathered in a more public setting.

As many of the videos show, participants typically fall off the shaky pyramid of milk crates. As a result, health care professionals and orthopedic physicians are issuing warnings regarding the dangers of the Milk Crate Challenge. They are seeing a variety of injuries, some extremely severe. There are rotator-cuff tears, broken bones, knee injuries, dislocations, and even spinal cord and neck injuries. Doctors say that the injuries are consistent with what they see when a person falls off a roof, plummets from a ladder, or is in a high-speed skiing accident. With no way to brace one’s self, the risk of taking the challenge and experiencing an injury from a fall is high.

Perhaps popular ESPN sports analyst Stephen A. Smith offers the best perspective on this new fad. “I challenge anybody – anybody on earth – to find dumber people than these people. What is wrong with these people? First, you drink the milk from the crates to get strong bones – then you fall off the crates to break them.”

Recently, TikTok has taken steps to disallow the posting of Milk Crate Challenge videos due to the dangers of taking the challenge. Still, enough of the videos are still available to view on other social media platforms.

Parents, warn your kids about the risks related to the Milk Crate Challenge. Talk to them about the root issues of their heart that drive them to seek popularity, approval, and celebrity. . . thinking that the attainment of these things will somehow bring satisfaction or fulfillment. Teach them that their lives are not to be about impressing others or building an audience, real or imagined. Rather, they are to take to heart these words Paul wrote to the Corinthians: “So, whether you eat or drink, or whatever you do, do it all for the glory of God” (I Corinthians 10:31).

As I watch the Milk Crate Challenge videos and think back on my own experience with issuing and taking dares, I can’t help but think about the words of Forrest Gump: “Stupid is as stupid does.” I also hear echoes of my own father’s voice and the many times he would look at me while shaking his head in disbelief: “Don’t be foolish!”

Perhaps we need to issue a strong dose of these phrases to our own kids. Why? So that we won’t have to ask this question: “What in the world were you thinking?!?”