When I woke up this morning I looked at the date and immediately my mind rewound and settled on this day in 1963. November 22 is always a significant day for me. . . . sparking thoughts of the past and the future.

Because of the nature of what I study through CPYU, I oftentimes get asked about the future and the past. “When did it all change?” “What do you think life for our kids will be like in five years?” . . . questions like that. They are head-scratchers, for sure.

I’m sure my answer to the former question has been shaped by my own memories and perceptions. But those memories and perceptions have been reinforced over the years, particularly as I’ve studied the arc and timing of the postmodern turn. . . beginning in the discipline of philosophy and then continually evidenced by changes, both rapid and slow, in pop culture and the cultural consciousness. 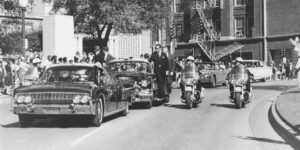 This is why November 22 is always so significant to me. Culturally, I believe we crested a hill on Friday, November 22, 1963 as that motorcade turned onto Elm St. in Dallas. Only a second-grader at the time, I remember the moment I heard that Kennedy had been shot and the events of that weekend with great clarity. . . as if it was yesterday.

As I’ve read various histories of the 1960s, it wasn’t that things began on November 22. Rather, it was more that things that had begun long before were blooming in ways that we saw and couldn’t ignore. It was a bit of a watershed and wake-up call.

For me personally, a good chunk of my childhood innocence was lost and I experienced fears I had never encountered before. Perhaps for the first time I was beginning to realize that, as Bob Dylan sings, “everything is broken”. It’s hard for me to put into words just how significant that weekend was for me as little kid. . . but it has stuck with me since. As we watch the news today, what I was beginning to feel then is confirmed over and over and over again. . . that all creation is groaning for redemption and restoration. 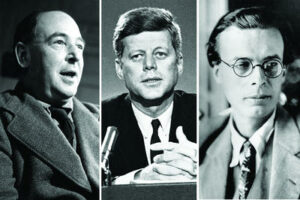 Many don’t realize that two other significant deaths happened on the same day Kennedy was killed. . . Aldous Huxley (author of the prophetically dystopian “Brave New World”) and C.S. Lewis. To my point, Lewis penned these words in “The Weight of Glory”: “Our lifelong nostalgia, our longing to be reunited with something in the universe from which we now feel cut off, to be on the inside of some door which we have always seen from the outside, is no mere neurotic fancy, but the truest index of our real situation. And to be at last summoned inside would be both glory and honour beyond all our merits and also the healing of that old ache.”

On this Thanksgiving week let us not forget that we can and must, with the Apostle Paul, point to our Rescuer. . . “Thanks be to God for the gift of His Son Jesus Christ!” (Romans 7:24).

And, let us thank God for the voices of truth that continue to faithfully – even from the grave – steer us away from the compelling and pervasive contemporary narrative that not only has its hands gripping the steering wheel of the culture-at-large, but is increasingly and sadly steering the church. C.S. Lewis is one of those voices of which I am reminded today. I’m especially grateful for my dear friend Crystal Kirgess who today, emailed me her Nov. 22, 2016 blog post (“‘We Have No Right to Happiness’ – C.S. Lewis’s final words of caution”), reminded me of the last published words of C.S. Lewis. . . words that speak with greater relevance today, than on the day they were published in 1964. Crystal writes. . .

53 years ago (November 22, 1963), John F. Kennedy was assassinated in Dallas, TX shortly after noon. Less than an hour earlier, C. S. Lewis had collapsed and died at his home in Oxford. The news of his death was quite overshadowed by the American tragedy.

On the day he died, the December 21st issue of The Saturday Evening Post was heading to press. In it were the last words written by Lewis for publication, a short opinion piece titled “We Have No Right to Happiness.” It could have been written today, and certainly should be read today. There are a few unsettling moments, typical of Lewis, that may cause some women to bristle (whether he was insensitive, obtuse, unaware, or misunderstood by readers is a discussion for another time). Regardless, his message is critical to this moment in human history, just as it was in 1963, just as it was in 1982 when SEP reran it, just as it will be next year, and just as it will be for the remainder of human history.

The article lays out a scenario in which person A divorces person B in order to marry person C, who has recently divorced person D. A and B were unhappy together (in A’s opinion, at least), as were C and D (per C, anyway), whereas A and C are head-over-heels-happy as a couple and obviously meant to be together.

They, in fact, have a right – perhaps even a duty – to use whatever means and follow whatever path that will help them fully realize their happiness. It isn’t just for their own good: it is for the good of humanity at large.

That’s a paraphrase, but you get the idea.

In typical Lewis fashion, he’ll have none of this weak and faulty logic. . . . Continue reading here.