A few years ago, a prominent Christian leader suggested that followers of Jesus living in today’s world would do well to “untether” themselves from the Old Testament. If I had followed that advice, I would have not only jettisoned a significant portion of the canon of Scripture, but I would have untethered myself from the Gospel message that runs from Genesis through Revelation. And at the very least, setting the first three chapters of Genesis aside would have removed not only my ability to understand God’s good purpose and plan for all of Creation, but also the purpose and plan of the the one set on undoing all God’s good and glory.

Without the Old Testament, I would not know the four words of life spoken by God: “In the beginning God. . . ” (Genesis 1:1). I would be ignorant to everything framed by those four words in terms of my identity and that of all others as divine image-bearers. I would have no idea of what it means to pursue God’s creational order for anything. . . relationships, work, gender, sexuality, marriage, vocation, creation-care, etc. I would have no understanding of the ways things are supposed to be. 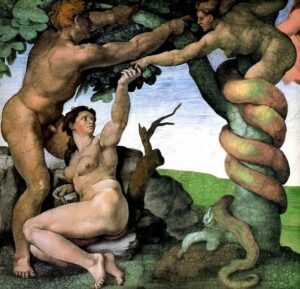 And, without the Old Testament, I would not know the four words of death. . . those first four words spoken by the wrecker of this word, Satan: “Did God really say. . . ?” (Genesis 3:1). I would not be aware of how when those words were first spoken the seeds of doubt sown in our first parents would be watered by human pride and desire to the point where they were believed, leading to the sin that undid all of God’s creational Shalom. I would not be able to see how things are not the way they are supposed to be. I would not be aware of how God immediately instituted a plan to redeem to Himself all things, undoing the curse of sin of the first Adam through the sacrifice of the second Adam on the Cross (Genesis 3:14-15). Neither would I know that even when I am living as a redeemed person under the reign and rule of Jesus Christ, the enemy would be bent on both whispering and screaming those same four words in my ears around the clock as I go about my daily affairs. I would be ignorantly and eagerly living “out of order” in my identity, relationships, work, gender, sexuality, marriage, vocation, creation-care, etc. My guide would not be God’s Word, but my own inner intuition. . . and I would have no idea what a recipe for disaster that would be. Ultimately, I would most likely see Jesus not as the One who came to atone for my sin, but the One who came only as example for how to live my life.

This morning, I was prompted to ponder these realities as I read these words written by Elisabeth Elliot in her little book, A Lamp Unto My Feet:

“Whatever the enemy of our souls can do to instill doubt about the real purpose of the Father of our souls, he will certainly try to do. ‘Hath God said. . .?’ (Genesis 3:1) was his question to Eve; and she trusted him, the enemy, and doubted God. Each time the suspicion arises that God is really out to get us, that He is bent on making us miserable or thwarting any good we might seek, we are calling Him a liar. His secret purpose has been revealed to us, and it is to bring us finally, not to ruin, but to glory. That is precisely what the Bible tells us: ‘His secret purpose framed from the very beginning (is) to bring us to our full glory.’ (I Corinthians 2:7). I know of no more steadying hope on which to focus my mind when circumstances tempt me to wonder why God doesn’t do something. He is always doing something – the very best thing, the thing we ourselves would certainly choose if we new the end from the beginning. He is at at work to bring us to our full glory.”

These, friends, are truths that we must not only embrace for ourselves, but teach to our children and teens.