As I write this, we are just nine hours into June. . . a month that in recent years has been designated as “Pride Month.” It’s a month set aside by our culture to celebrate the LGBTQ+ community and lifestyles. 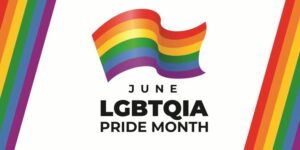 One youthworker Facebook group that I’m a part of has already lit up this morning with a post featuring a Pride flag and a request from the poster for information on how other members of the group handle and address Pride Month in their youth groups. As I’ve been scrolling through the responses, I can’t help but be reminded of something I tell parents and youth workers in my introductory comments when presenting seminar material on teaching kids a biblical approach to matters of sex and gender: We have not trusted well. We have not taught well. We have not treated well. All three of these failings are clearly evident in the back and forth responses on the post.

What do I mean by this? For starters, I think the church does, in fact, deserve criticism on all three fronts. When it comes to trusting, we have decided just like our first parents to listen more intently to our enemy and his constant convincing whispers of “Did God really say. . . ?” I can speak for myself here as a broken and sinful human being. I count myself among all other human beings as one who is sexually broken and one who struggles with broken desires (more on that later this week). Our tendency as such is to from time-to-time find ourselves functionally distrusting God at his word on sex and gender by choosing to go our own way, even when we might philosophically state our full belief in God’s Word. Neither do we trust well when we teach cultural values on sexuality and gender rather than God’s design.

When it comes to teaching, we are either ignorant to our need to teach, ignorant about what to teach, or choosing to teach something other than God’s good design for sex and gender. All too often we view the Scriptures through the lens of culture/personal desire, rather than submitting our culture/personal desire to the authority of Scripture. There’s no way to adequately describe the damage done by these approaches.

When it comes to treating those who are deeply enmeshed with disordered sex/gender desires and those who choose to act on those desires, we have somehow elevated sexual sin to a category that eclipses all other types of sin, especially those which we struggle with personally. While an apology is never warranted or in order for carefully and lovingly teaching God’s design (unsettling as it may be for some), we do owe apologies for our consistent lapses in posture. . . which is a sin in and of itself.

Friends, there’s much work to be done, and those who are raising and ministering to children and teens have to get this right. I can’t emphasize that enough. Our children and teens are being educated on matters of sex and gender by a current cultural narrative that engages in 24/7 messaging, even to children as young as pre-school age. This education – or more accurately mis-education – takes God’s good gifts of sex and gender and distorts them in ways that undo God’s grand and glorious plan for our children and teens. The reality is that whoever speaks to a child first about sex and gender will set the bar for what is understood to be true, resulting in everything they hear after that being measured in light of whatever they heard first. Consequently, we must speak up first and teach them the truth. We live in a day-and-age where home and church must faithfully offer Biblically-based correctives to the cultural narrative on sex and gender.

Paul Tripp has said that the Bible’s four most important words about sex and gender are these: “In the beginning God. . .” (Genesis 1:1). This establishes God as the maker of all things, including sex and gender. He declared all things “good”, while establishing a purpose and plan for all things, including sex and gender. But very quickly, the first four words spoken by the enemy of God – “Did God really say. . . ?” (Genesis 3:1) – led our first parents into questioning God’s love and authority. They then chose to rebel against God by going their own way rather than His way. This choice to sin against God resulted in the corruption of God’s good creation, which immediately undid everything good. . . including sex and gender. Satan continues to undo God’s order and design through never-ending shouts and whispers to all of us, pointing us to choosing our plan for sex and gender rather than God’s plan, fueling our doubt of God’s Word by continually asking us, “Did God really say. . . ?”

As parents and youth workers, we must use our voices to teach our children and teens what God really did say if we hope to help them find their way through the cultural narrative’s lies on sex and gender. Over the course of the next couple of weeks I will be posting 10 truths on sex and gender from God’s Word we must continually teach and talk about with our children and teens. While not exhaustive on the matter of sex and gender, they are foundational to setting our kids on a lifetime journey of glorifying God through knowing and doing His will for sex and gender.

As someone who is a dad, grandfather, youth worker, and youth ministry trainer, one of the most sobering reminders of the power of these high callings and high privileges comes straight from the mouth of Jesus, and I take these words very seriously: “But whoever causes one of these little ones who believe in me to sin, it would be better for him to have a great millstone fastened around his neck and to be drowned in the depth of the sea” (Matthew 18:6). As an act of obedience and worship, I have to get my teaching on sex and gender right.

Parents and youth workers. . . study and teach God’s truth on sexuality and gender. You will have countless opportunities this month to lovingly and obediently lead kids into knowing and experiencing the kind of freedom and flourishing that comes with following God’s will and way. Don’t miss it!

To download a helpful handout, “God’s Plan For Sex and Gender: 10 Teaching Points For Home and Church” , click here.

Also, check out this helpful article, “Remaining Faithful When Others Embrace LGBTQ+ Theology.