OK. . . that was a dirty little trick, wasn’t it? But now that I have your attention, let’s talk about technology and what it does to us. 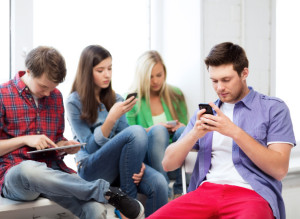 Better yet, let’s ponder Gillian Share-Raab’s out-of-the-box thoughts on what her smartphone has done not only to her life, but to the lives of her peers. Gillian, a student at a suburban Philly high school, wrote an interesting op-ed piece for her local paper, entitled “Why my iPhone is ruining my adolescence.” Gillian’s thoughts are out-of-the-box for the simple reason that she is thinking about what her technology is doing to her life. Most people her age. . . or anyone of any age for that matter. . . aren’t thinking about these things. I’m guessing she has no idea who Marshall McLuhanwas or what he’s famous for saying, but her thoughts put meat on the bones of McLuhan’s conviction that “first we shape our tools. . . and then our tools shape us.”

Gillian writes, “In between being awake and sleeping, I need to be on my phone checking endless social media accounts in order to keep up with every friend and acquaintance whose lives somehow ended up in my daily scrolling. . . if I were to print and lay out every inch of Instagram and Facebook I have examined, I’ll bet it would circle the planet three times. . . The smartphone exists to provide a barrier between people in order to make both parties feel more secure and comfortable, allowing each person to remain in his or her security bubble forever. . . In a time when I’m supposed to be meeting new people, having new experiences and breaking out of my shell, I feel more and more as though phones act as a virtual wall. Now, my conversations consist of dehumanized, emotionless messages used for necessity that are conducted without essential facial expressions or body language (i.e., texting). . . I often think of how different the high school experience must have been for my parents’ generation, or even just 15 years ago, when two people seated next to each other with common interests and mutual friends were able to have a civil conversation without looking down at their phones in order to avoid eye contact. . . In my experience, the only way to truly be connected with the thoughts and feelings of others is by disconnecting everything else.”

Gillian’s words struck me as even more important last Thursday, upon the release of the latest report on “Teens, Social Media & Technology” from the Pew Research Center. Here are some highlights from the report on the social media and technology habits of our 13 to 17-year-olds. . . .

There’s a whole lot more in the report and it’s worth a look.

After reading the report and thinking about Gillian, Marshall McLuhan, and all the research I’ve been reading over the last few years as a part of our Digital Kids Initiative here at CPYU, I’ve got some thoughts. . . .

First, it’s not at all surprising that media time continues to eclipse family time. We not only are spending more and more time with our greater number of media devices, but that time is personal rather than corporate time. In other words, we are not only focusing our attention on our screens, but we are doing so in isolation from one another. We are decreasingly focused on each other or with each other.

Second, media is a primary nurturing institution. It’s a window into the world, and the culture is jumping through that window and onto the laps of our kids, catechizing them 24/7. . . and by doing so shaping both their identity and their world-view.

Third, if we’re spending more and more time with our devices, it follows that we must be taking that time from somewhere else. . . leaving us spending less and less time on things that used to take up our time and attention. And while we might be shifting from things that aren’t all that constructive, it’s highly likely. . . maybe even more likely. . . that our attention is being shifted away from things that truly matter, to things that shouldn’t matter at all. In effect, online time may be wasted time.

Fourth, time spent on social networking typically involves a good portion of curationism. And tending to our online personas not only results in the fabrication of false identities (usually), but it also includes a good dose of “share-enting” (putting our kids out there in an effort to make them and ourselves look good). These practices feed and nurture narcissism. In addition, they leave our kids thinking that their value and worth lies in appearance, accomplishment, and achievement.

I recently read about a west coast school that conducted a little experiment they called the “Tech Timeout Academic Challenge.” The students agreed to seal their smartphones and other screens into manila envelopes for three days just to see what life was like. Some couldn’t last the entire three days. Some made it. All of their follow-up comments offer great insight into just how much our technological tools are shaping us.

When I speak to parents, youth workers, and teens on using social media to the glory of God, I never tell them to trash their devices. Rather, we talk about best practices. One of those best practices is to move slowly and carefully into the world of technology.

A bit of wisdom from the Proverbs is timely, for sure. . . . “The prudent sees dangers and hides himself, but the simple go on and suffer for it” (Proverbs 22:3). So maybe, just maybe, our carelessness is contributing to what one day might be seen as the slow, self-inflicted death of vital aspects of our humanity.