This Facebook thing continues to be fun. The reason is rather simple. . . . I’ve connected with my old youth group kids from the 80s and we’re rekindling loads and loads of memories. . . . many of which, unfortunately, have been documented in posted photos. Then there’s the opportunity to connect with new friends, most of them involved in addressing matters of faith and culture, leading students in youth ministry, or some combination of both. It’s rather amazing. For those of you who have grown up in a world where this type of technology is normal, remember that I used to fall asleep with a 9-volt battery transistor radio glued to my ear as I either listened to my beloved and perpetually disappointing Phillies, or one of the two local Top 40 am stations. . . . WIBG and WFIL. Thus, my amazement. Speaking of 9-volt batteries, I felt pretty good about teaching a young friend how to test them the other day. If you don’t know how to do it, get ahold of one and stick the terminals on your tongue. Just don’t do it while you’re sitting in the tub. 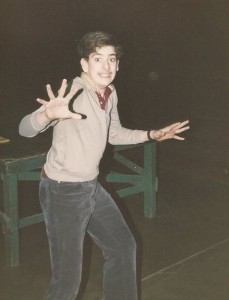 So one of my wonderful youth group kids was one of the first to join our growing online reunion. His name is Jeff. I loved this guy back then and I love him now. Jeff reappeared on my map one Sunday morning a few years ago, rather unexpectedly. We were sitting in worship when my wife gave me the old elbow. I wondered if I was singing off key, again. I wondered if some article of clothing was askew or improperly affixed. That’s usually the case. This time she leaned over with a smile on her face and she said, “Look over your shoulder up into the balcony where the choir is sitting. Is that Jeff Caddick up there?!?!?” I turned and looked. Yep. It was Jeff. At least a good dozen years had passed since I had seen him. We bee-lined up to the balcony after the service and began what’s turned out to be a great reconnect. I discovered Jeff was now a man, married, and a dad. I was suddenly old. Now I see Jeff and his family almost every week.

Jeff’s one of those guys who’s a computer whiz. It wasn’t surprising to find him on Facebook. . . or maybe he found me. He’s also a very funny guy who has posted some hilarious captions on the growing arsenal of photos that have been uploaded to our page. I think Jeff has to be hilarious, as most of the photos of him in his high school days capture the hilarity of his personality. . . . and his wardrobe choices. . . .which sadly, were much like the choices the rest of us were making. Having a sense of humor serves to deflect the pain.

Being a computer guy, Jeff is also a blogger. A couple of weeks ago he posted some of his memories of his own high school years. . . . memories that were prompted by those photographic time capsules. He blogged about the conflicting pressures and experiences that combined in his life leaving him – like all teenagers – wondering who he was and what the world might think of him. Jeff’s posting got me thinking about teenagers today. This stuff of the teenage experience has never changed. Kids still struggle.

Over twenty years have passed and Jeff’s done great. He’s walking with the Lord and married someone who’s doing the same. That’s what I prayed for all those kids. Now, he’s blogging about wondering what his little girls will grow up to be and experience. I’ve been there with that with my own four kids. In fact, when I had one eye on Jeff and his peers back in the 80s, I had another on my kids, wondering and praying about what their lives would be like in the future that’s become today.

Back then, I didn’t know what Jeff was thinking. In my mind, he was a kid who had no reason at all to lack confidence in himself. We set out as a youth ministry staff to unconditionally love Jeff and his peers in our group. We always encouraged them to do the same to each other. I prayed then and I hope now that we did a good job at it. If we did, it was in spite of ourselves and purely by the grace of God.

Still, there’s a lesson in there for all of us who are working with and ministering to kids. You don’t always know what they’re thinking or what they’re going through. We need to pray for them, love them, accept them, be the hands and feet of Jesus to them. . . . and encourage them to be and do the same to each other. Being a teen was rough back then. I think that when Jeff looks at his wonderfully cute little daughters he knows that it’s only going to be much more difficult for them as their teen years approach. Jeff and his wife will love and nurture them. They’re already doing that. Hopefully, there’ll be some understanding youth workers who will come alongside and do the same. There can never be too many of us who love Jesus who also commit to loving kids. That’s a message I hope to communicate to all my new Facebook youth ministry friends.