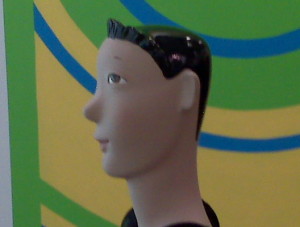 I thought I’d pass on some brief thoughts on kids and pressure. . . . both of them prompted over the weekend. The first thought was one of many that came during my annual trip to the mall. I don’t go to the mall much anymore. Labor Day weekend, however, is another story. With summer’s end and the start of my travel season fast approaching, I usually go pick up a new pair or two khaki pants, a couple of shirts, and a new pair of shoes.

Just when I was getting a little tired of being victimized by all the appeals to my wallet and for my allegiance, I started a ride up an escalator that was dumping me off on the second floor of a regional department store known as The Bon-Ton. Don’t ask. I have no idea how they came to that name nor do I know what it means. It’s just one of those local phrases that becomes so much a part of your vocabulary that there’s nothing odd sounding about it at all. . . . until you hear it through the bewildered ears of someone who doesn’t live around here at all. 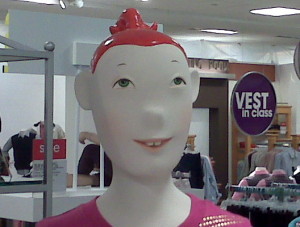 As I got off the escalator I found myself in the department that caters to late elementary and middle-school-aged kids. I was taken back and then pleasantly surprised by what I saw. The Bon-Ton has enlisted the help of a small army of mannequins that are – dare I say – refreshingly and unrealistically. . . . weird. In other words, I don’t think there’s a kid in the world who would look at these plastic people and feel any pressure at all to conform to what they’re seeing. In fact, one look at these things and it doesn’t matter who you are. . . . you’re thanking God for making you the way He did. So the “pressure’s off” award goes to The Bon-Ton. Kids already have enough appearance pressure hammering them from all sides. But that’s not happening at the top of the escalator at the Park City Mall!

Kids and pressure Part II. . . . again prompted by something this weekend. This time it’s the overwhelming attention given to Sarah Palin’s teenage daughter Bristol and her unmarried pregnancy. Yes, these things are worth noticing and talking about. There’s a trend afoot that must be addressed. I’m sure Sarah Palin would agree. I wouldn’t be surprised if she addresses the trend sometime very, very soon. But it’s a shame that the news media is moving beyond using the story solely as a launching point to discuss positive and helpful ways to deal with the crisis of teenage sexuality and pregnancy. Instead, there’s a seventeen-year-old-girl getting dragged into the wrestling ring of partisan politics by a media machine that could wind up destroying the poor kid. We need to address the social problem. Not attack the girl. Kudos to Barack Obama for stepping in and asking people to leave her alone. I wonder what Bristol Palin thought about when she went to bed last night? Just four days earlier she was virtually unknown in America. Now, she’s a household name and the topic of conversations everywhere. It sounds to me like she’s going to get all the support she needs from her family. Let’s hope that the pressure put on by the media doesn’t do irreparable damage to Bristol Palin.