Are you like me? Do you feel like you know her personally already? Two weeks ago right now you could have asked me – for a million dollars – can you name the Governor of Alaska? You’d get to keep your million. You could also have asked me, “Who is Sarah Palin?” Again, I’d have a really stupid and confused look on my face. . . well, more stupid and confused than I normally look. But now a two-week media blitz that began with a well-thought-out political strategy has made Palin’s face very, very familiar. 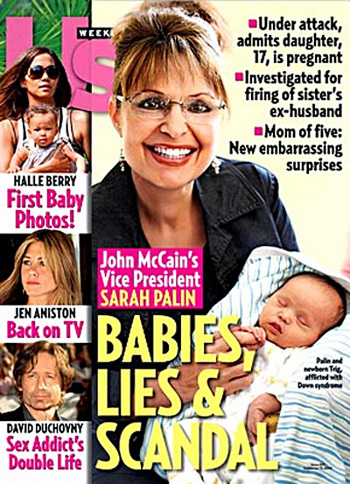 So this, today, isn’t at all about politics or my political leanings. Please don’t try to read between the lines to figure out if I’m an elephant or a donkey (I’ve been called both many times!) Rather, it’s just some thoughts about Sarah Palin I’ve had that were prompted by a trip to the grocery store the other day to pick up some creamer for our office coffee.

While standing in line I was scanning the rack of tabloids. I consider it a guilty pleasure for someone like me who is trying to think Biblically and critically about culture. Every now and then, when nobody’s looking, I will actually pull a tabloid off the rack and page through it. Because I consider myself to be a somewhat sophisticated guy, I avoid The National Enquirer and go right for my black and white favorite which is also the standard bearer for good and responsible journalism, The Weekly World News. You know, the one that continually runs articles on Bat Boy and things like the time the devil was seen escaping through the smokestacks on an offshore oil rig. That’s good stuff. So the other day my eyes were drawn to the latest edition of Us Weekly. There she was on the cover. . . . Sarah Palin. She was holding her infant son, Trig. That got me thinking about what the candidacy of Sarah Palin and the response to it tell us about ourselves.

First, there’s our love affair with celebrity. This might be why I increasingly can’t stand election years. It’s the same old stuff recycled over and over again. Everyone says they’ve got the cure for what ails us (isn’t sin what ails us?), and given four years, they guarantee a fix. . . . the fix being redemption and security through economic prosperity and the elimination of threats to it. I was reminded of this when I watched C-Span the weekend between the two conventions. They ran a series of old nominee acceptance speeches from conventions past. Whether broadcast in black and white or color, it was all the same. Nothing’s changed. The only difference is the increased dependence on PR and spin through the years. I think we’re seeing that now more than ever with this election. So, since we love celebrities, those who pull the strings need to make celebrities out of the candidates, or perhaps even choose candidates based on their celebrity potential. I was surprised and not surprised to read in the paper this morning that the first magazine interview Sarah Palin granted after being named to the ticket was with People magazine. Are you serious? Don’t get me wrong. I think this says more about us and what we’re looking for, than it does about Sarah Palin and her advisors.

Second, we just love scandal, don’t we? We’ve become a nation of voyuers. The cover of Us Weekly serves as Exhibit A. . . “Babies, Lies, and Scandal.” The TLC reality show filmed in my neighborhood serves as Exhibit B. Everywhere I go I hear more and more people talking about their fascination with this show about nothing. What’s the draw? They tell me they love watching these bickering parents and their eight children, especially when the children bicker as well. Maybe it all makes us feel better about ourselves, allowing us to look at and justify the bad things in our own lives, because, after all, it’s not as bad as what the media gives us 24/7. Brett Michael’s promiscuous dating life. Who cares? We do. Gene Simmons’ family. Who cares? We do. Hulk Hogan. Who cares? We do. If we’d stop watching and reading this stuff, the media might offer up some more positive fare.

Third, why the fuss about the babies? Because as a culture – on both sides – we fuss about the babies. In the conservative church we’ve been outspoken about premarital sex. If we’re going to be true to the One who’s called us to come and follow, we need to challenge our culture’s sexual standards. But when one of our own falls, we oftentimes resort to crucifixion rather than loving discipline, restoration, nurture. . . and rejoicing over a new life. We do the same when one who’s not our own falls. . . and we gloat with a Phariseeical pride because “that’s what they deserve,” and then we shun them as well. Shame on us. For those of you who are theological conservatives like me, don’t be surprised when Palin’s political and ideological detractors point out how quickly we’ve embraced Bristol Palin and her parents’ positive response to her pregnancy. Gracious we must be, no doubt. But I do think the grace needs to be dispensed evenly, especially to those who have yet to experience any grace from God’s people. And then there’s baby Trig. The Palins did what was right and just, and I’m guessing there never was question in their minds. That little boy will bring great joy to many, many people over the course of his life as he lives out the image of God that’s stamped in, on, and through him. How have we ever gotten to the point where we treat pregnancies as we do cleaning out the attic. . . deciding what’s worth keeping and what to discard. I love my Down’s Syndrome friends. Every Sunday I get to see my little friend Andrew. His smile and joy are infectious. Last night I went and watched my friend Teddy play soccer under the lights with his Special Olympics teammates. I never in my life remember seeing a game where the players enjoyed themselves more!

Finally, we’re more about image than we are about substance – and please don’t think that I think Palin is all image and no substance – I don’t. But I’m guessing that since more and more voters have been raised on a constant media diet, eating all that stuff will inform the foundation on which they will cast their vote. It’s not so much about what a candidate believes anymore, as it is about what they look like, or how well they can communicate, or how well they can come off when the cameras are on. Perhaps nothing I’ve seen in the last two weeks captures this more than the online collection of shirts, buttons, and bumper stickers featuring Sarah Palin that look like they’ve been created and manufactured by frat boys somewhere. There’s Palin’s smiling face alongside the acronym, V.P.I.L.F. It’s plausible that a segment of the population might wind up pulling a lever for President based not on well-thought-out convictions, but on the sex-appeal of a Vice-Presidential candidate.

Oh, one more thing. . . . you can put some of this to the test at 11:30pm eastern time on Saturday night. It’s the season premier of Saturday Night Live. I’m sure alot of this same stuff will get lampooned in true SNL fashion. And I can’t wait to see what they do with personality-filled little Piper Palin.