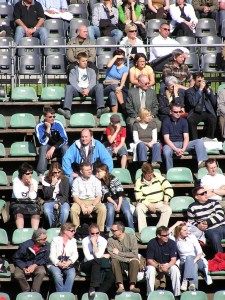 Will my hopes be dashed again? Or will my beloved Phillies take a different path this year and fail to disappoint? We’ll see. It all starts this afternoon. Perhaps it’s timely that I’ve been thinking and writing quite a bit about sports lately – our kids, our pressure, our spectating, etc. It helps me to keep it all in perspective, win or lose.

Because of that, I thought I’d pass on a couple of things I’ve penned in the last few weeks. First, there’s an article I did for our latest edition of ENGAGE that you can download here. It’s called “Turf Worship,” and I think it lends itself well to these fall days filled with baseball and football.

Then, there’s this little excerpt (below) from that article that we included in this months CPYU Parent Page. Let me know what you think.

Here’s what I wrote for the CPYU Parent Page about the sports pressure we put on our kids: Researchers at Michigan State University report that 70% of kids who play youth sports drop out by the age of 13. Sadly, many of these dropouts are gifted athletes who should be exercising their God-given athletic gifts and abilities long into their teen years. Others are late-bloomers whose discouragement leads them to hang it up, causing them to miss out on the years of successful play that could be theirs if they would only be encouraged to hang in long enough for their bodies and skills to develop. Then there are those who continue on while allowing the pressure to excel to lead them to try to get an edge through cheating and/or performance enhancing drugs. It’s not good.

I recently shared a cab ride from the airport with a dad who was more than happy to tell me about his athlete-daughter. He informed me that she was so highly regarded as a soccer player that their family’s summer would be centered on traveling around the country to various showcase tournaments where she would be able to display her skills. In addition, he told me that his daughter was a highly successful baseball player. “Baseball? Not softball?”, I asked. “Do they let girls play that down in Georgia?” “Yes,” he enthusiastically answered. “She’s leading the league with 7 home runs.” I was impressed. Then I asked, “How old is your daughter?” “Six,” he replied. Ouch. God bless that little girl.

The pressure’s even greater when parents live vicariously – trying to find redemption for their own athletic failures, unfulfilled dreams, or empty lives – through their kids. Many pressure and push in the hope that their kid will score the college scholarship that will lead to a professional contract. The reality is that college scholarships are few and far between. A pro career is highly unlikely. According to research from Dan Doyle at the Institute for International Sport at the University of Rhode Island, there are 475,000 fourth grade boys playing organized basketball in the U.S. At the same time, there are only 87,000 high school seniors playing basketball. Of those 87,000, only 1,560 will win Division I scholarships, 1,350 will win Division II scholarships, and 1,400 will play at non-scholarship Division III colleges. Of those 4,310, only 30 will make it to the NBA. Still, parents push, push, and push some more. Do you want to know how bad it’s gotten? Go to a local soccer field where elementary-aged kids are playing an organized game. Don’t watch what’s happening on the field. Turn sideways and look down the sideline. And, just keep on looking and listening. Be prepared. It might break your heart. Then ask yourself, “Am I putting on too much pressure?”