So I’m scratching my head this morning for the millioninth time while saying, “Why didn’t I think of that???” I’ve always wanted to invent something. Problem is, somebody else always gets the idea that I don’t. So, I guess it’s hopeless.

This morning’s prompt was an article on a brilliant idea that’s come from the Ford
Motor Company. They’ve developed some new parent/teen technology that’s sure to sell a few cars. Here’s the deal. . . Ford has developed a new techology that will be available on many 2010 models. Parents who own the cars equipped with the new teen-limiting technology give their teenaged drivers a key that’s loaded with a computer chip that limits the car’s top speed to 80 miles per hour. (Of course it’s a great idea for highway driving, but the cynic in me quickly realized that kids can still go 65 miles an hour over the speed limit in a school zone!)

But it doesn’t stop there. Parents can also program the key to limit the volume on the car’s sound system, thereby elminating what is one of the most common distractions for teen drivers. (Do you think they could also include a text-messaging jammer?) The key can also be programmed to make the car sound continous alerts if the driver isn’t wearing a seat belt. Great idea.

Now think about all of this in relation to adolescent development and youth culture. 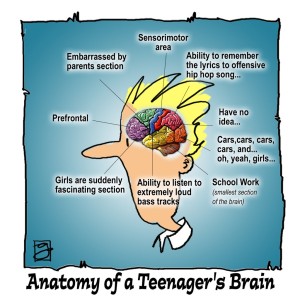 We all know that the brain’s pre-frontal cortex takes awhile to get all wired up. . . . like several years. . . . many of those years ending in the suffix “teen.” Lack of judgment and an overactive impulsivity gland (I think there is such a thing)combine behind the wheel in some pretty frightening recipes, many of which can and do quickly lead to disaster. I’m still sitting on some closely held secrets about some things I did behind the wheel when I was a teenager. It is only by God’s grace that I never got hurt or hurt anyone else. And you’d better believe I’ve never told my immediate ancestors or descendants some of this stuff. I might have benefitted from a car equipped with Ford’s MyKey.

Enter today’s teenage driver. The impusivity factor not only continues to exist, but is fed, fertilized, and watered by an ethical weather front that’s moved into and stayed in the neighborhood. If you’ve been to any of my seminars you’ve heard me talk about postmodern amorality. I use my fist as a demonstration tool. My clenched fist represents a commonly held standard of morality. I place my other hand on that fist to represent behavior that conforms to the standard. . . . behavior that can then be labeled as “moral behavior” . . . like what happened when I hopped behind the wheel as a teen and I obeyed all the traffic laws. I then lift my hand off my fist and move it around through the air, indicating behavior that doesn’t conform to the commonly held standard of morality. . . like what happened when I’d choose to break the law. I was being “immoral.” Then I take my fist and make it disappear behind my back. This is the loss of commonly held standards of morality. In this “amoral” world moral and immoral behavior becomes a conceptual impossibility in terms of societal standards that are accepted and held to by all. Everyone defines morality for themselves, doing what’s right in their own eyes (ever read anything about that anywhere?!?).

And this is where our teens now live. . . . and the MyKey becomes a sad commentary not so much on teen impulsivity, but on our moral condition. If we are no longer committed to exercising the internal constraints and restraints of self, we need a growing combination of “someones” and “somethings” outside of ourselves to rein us in. Are you looking to get a job in an expanding field? Go into law enforcement, litigation, etc. Are you looking to invent something that will sell? Invent the MyKey.

Come to think of it, most of us would be out of a job if human depravity would cease to exist. Someday it will. But it won’t be because of anything we’ve done or made.