This morning I’ve been getting ready for a big trip to Pittsburgh scheduled for next week. I’m working with a couple of churches who have put together a very aggressive schedule of events, most of which are designed to engage the culture-at-large that exists outside the “walls” of our congregations. The folks in Pittsburgh have been diligent in the task of framing, wording, and preparing in ways that are truthful without the “noise” of turnoff. . . . which, by the way. . . tends to typify many of our shameful efforts to engage a watching world in compelling ways. In an email to one of the event’s organizers earlier this morning, I suggested some wording changes in something I was putting my name to so that the message we want to share doesn’t get lost in translation.

This all got me thinking about a couple of conversations I had last weekend at the Youth Specialties National Youthworkers Convention in Sacramento. The first was about some of the infamous stuff done by the brothers and sisters over the years. Or perhaps I should say, the infamous stuff made by the brothers and sisters in an effort to bring more folks into the fold. A couple of us got to talking about Christian “witnessing tools,” you know, that Jesus Junk that we think is more effective than an embodied apologetic for the faith. One of those things that we talked about has been sitting on top of my desk since the day I picked it up – almost 10 years ago – in the exhibit hall at one of the conventions. Actually, and I’m ashamed to admit this, I paid for it. It’s a can of root beer. . . Holy Cross Root Beer to be exact. 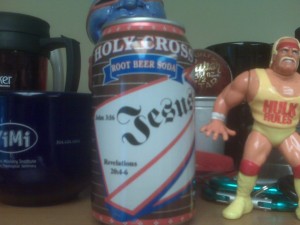 Never heard of it? Neither had I. I think it’s Christian root beer. . . . or at least that’s what the guy manning the booth told me. What makes root beer Christian? I still haven’t figured that one out. Is it Christian because the can features a cross, a “Jesus Saves,” and references to Acts 16:31, John 3:16, and Revelation 20:4-6? Does drinking it draw one closer to God? I can’t answer that because I’ve never popped the top to take a swig. Does that mean that 10 years later what’s in my can is actually better than what was in there when I first laid eyes on it? Who knows? All I do know is that if this is the best we can do. . . or even if we think this is an effective tool in our witnessing arsenal. . . . well, then we’re nuttier than we think. And I don’t mean “nutty” in a nice way.

Another weekend conversation was had with some of my favorite new friends who are ministering to kids through First Presbyterian Church in Boulder, Colorado. Kim is one of the female interns who used to be a waitress at Appleby’s. She told us how waitressing at the chain on Sunday afternoons was always an embarassment. Why? Because the restaurant would fill up with the brothers and sisters from the after-church crowd who would eat a normal amount of food, then leave an embarrassingly abnormal tip. . . . like a gospel tract sans cash. Do we seriously think that we’re leaving a good impression when we share the Gospel of being cheap, cheesy, and uncaring with a piece of paper that winds up provoking anger before flying into the trash? Are we really caring for people when we demand that they wait on us for $2.01 an hour plus tips. . . . and we don’t leave anything? Shame on us.