So I’m walking through our church foyer the other week when I’m flagged down by a couple of mothers of teenagers. They wanted to know my opinion of Facebook. They weren’t the first to ask. It seems that it’s one of the first questions to pop up everywhere I go. . . . . “What should I do about Facebook?”

How do I answer? I begin by telling them that I’m already on it, that it’s not a bad thing, and that it is a wonderful tool for connecting with and ministering to people. It’s also a God-send to parents who want to keep track of what’s going on in their kids’ lives. I also tell them that it can be a really, really bad thing if it’s used in the wrong way. . . . just like just about everything else that’s a part of life in this sinful and fallen world.

For example, I’m looking right now at the WKRP in Cincinnati mug that sits on my computer desk. It’s a great thing if I want to have a cup of coffee. It’s a horrible thing if I choose to use it as a weapon and throw it at one my kids. It’s not the thing, but the sinful inclination of my heart that makes it potentially bad in the way that it’s used. Jesus talked about that, remember?

It’s about this time that I explain Facebook – and the rest of life for that matter – using some great terms Al Wolters uses in his book, Creation Regained: Biblical Basics for a Reformational Worldview. Wolters helpfully differentiates between structure and direction. Structure, he says, refers to “the order of creation, to the constant creational constitution of any thing, what makes it the thing or the entity that it is.” He continues, “Structure is anchored in the law of creation, the creational decree of God that constitutes the nature of different kinds of creatures.” Here’s where it gets interesting. . . . it’s the direction that we should be concerned about. You see, the direction can point to God’s Kingdom order and things that are good, true, right and honorable, or it can point in a direction away from God and towards the world, the flesh, and the devil. Therefore, Facebook shouldn’t be condemned as a structure. We should, however, be concerned about the direction that our use and the use of our kids points to. . . which, in the end, calls us to prayerful diligence in monitoring our use and our kids’ use of this wonderful new technology.

Which brings me to Twitter, the relatively new and rapidly growing micro-blogging social networking technology that we jumped on board with here at CPYU just a few days ago. Have we lost our minds? We’re trying not to! Rather, we want to employ the Twitter structure in a direction that brings honor and glory to God. 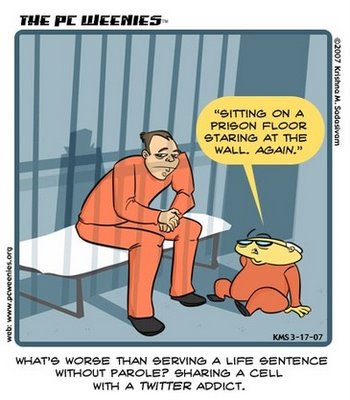 We don’t want to spend growing amounts of time sending Twitter updates that chronicle our every move as if anybody really cares. That’s the problem with Twitter. . . . it could feed our inclination towards self-absorption, narcissism, and the growing sense that there are and should be people in this world who care about when I get up in the morning, when I eat, what I eat, when I go to the bathroom, and when I go to bed. As an aside, there are people who do want to know when I’m not at home. . . . thereby affording themselves a greater ability to break into my house and rip me off! In the latest edition of Relevant magazine, Brett McCracken has an article entitled “The Problem of Pride in the Age of Twitter.” McCracken got me thinking about how we waste our time, waste other people’s time, encourage voyeurism, become obsessed with status, view ourselves as brands, and feed narcissism when we use the Twitter structure (and numerous other new technologies) in the wrong direction. He writes, “We’ve become addicted to a strange sort of connectivity – a connectivity that maintains a comfortable balance between distance and proximity, anonymity and overexposure. We’ve become addicted to hyper-controlled, self-appointed ‘just how I like it’ communication. In this McDonald’s-meets-Macintosh world, we’re endowed with the ability to be even more self-obsessed than ever before. . . . Our lives have suddenly become much more dramatic, worthy of being ‘performed’ on a stage visible to millions.” I understand how easy it is for kids to fall into this type of thinking because of where they’re at developmentally. But what about those of us who are young adults and older adults? If this thing runs its course we might all wind up living in a world where every Twitter message we send simply says, “I’m now on Twitter!”

And while the jury is still out on where this is taking us as a culture, I don’t think it’s to any place too good if we become consumed by using the Twitter technology 24/7. One of the marks of today’s culture is the seeming daily development of new communication and entertainment technologies. Our options increase minute-by-minute. . . and we grab it all up with great enthusiasm and very little thought or discernment. Now is the time for Kingdom-people to be thinking critically and Christianly, not so we can condemn and flush structures, but so that we will employ them with proper motivation and moderation in a direction that is glorifying to the One who has given them to us, and exemplary to a watching world.

So that’s what we’re trying to do with Twitter. . . .and if you want to follow us to get the latest updates on what we’ve got for you to use at CPYU, you can do so here.