A couple more hours and we’re on our way. Yesterday in church dozens of people assured us of their prayers. We need them. Yours would be appreciated as well. Quite frankly, there are only three things that I’m sure are going to happen while we’re in Rwanda and Kenya with Compassion. And to be honest, I’m not even sure what shape those three things will take.

First, I know we’ll laugh. I’m looking forward to laughing harder than I’ve laughed in years. It happens every time we’re with these guys. Even though it’s now several times a year, it’s never enough. If you’re in youth ministry, you know Duffy, Doug, Chap, Marv, Rich, and Jim. We have loads of fun together. I’m sure this will be no different.

Second, I know we’ll cry. “Lord, let my heart be broken by the things that break your heart” is the now-famous prayer that Bob Pierce prayed so many years ago. God will answer that prayer as we see first-hand suffering like we’ve never seen before. I’m glad I’m going to get to experience it with my wife and this group of friends. The processing will go deep, I’m sure.

And third, we’ll be changed. I have no clue what shape or form that change will take. I simply know it will be. And when it happens, I know it will be much-needed and God-ordained. 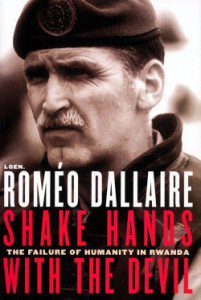 Over the weekend I started reading the last of the books on Rwanda that I’ve been working through. This one is Shake Hands With The Devil: The Failure of Humanity in Rwanda by Romeo Dallaire. Lt. Gen. Dallaire was the Canadian who commanded the U.N. Force in Rwanda during the Genocide. His name has popped up in every book I’ve read to this point. Now, I want to hear what he has to say. Ever since returning he’s struggled with PTSD and was even considering suicide.

In the Preface to the book, Dallaire writes these words: The following is my story of what happened in Rwanda in 1994. It’s a story of betrayal, failure, naivete, indifference, hatred, genocide, war, inhumanity, and evil. Although strong relationships were built and moral, ethical and courageous behavior were often displayed, they were overshadowed by one of the fastest, most efficient, most evident genocides in recent history. In just one hundred days over 800,000 innocent Rwandan men, women and children were brutally murdered while the developed world, impassive and apparently unperturbed, sat back and watched the unfolding apocalypse or simply changed channels. Almost fifty years to the day that my father and father-in-law helped to liberate Europe – when the extermination camps were uncovered and when, in one voice, humanity said, “Never again” – we once again sat back and permitted this unspeakable horror to occur. We could not find the political will nor the resources to stop it. Since then, much has been written, discussed, debated, argued and filmed on the subject of Rwanda, yet it is my feeling that this recent catastrophe is being forgotten and its lessons submerged in ignorance and apathy. The genocide in Rwanda was a failure of humanity that could easily happen again. After one of my many presentations following my return from Rwanda, a Canadian Forces padre asked me how, after all I had seen and experienced, I could still believe in God. I answered that I know there is a God because in Rwanda I shook hands with the devil. I have seen him, I have smelled him and I have touched him. I know the devil exists, and therefore I know there is a God.

After reading those words I realized that Dallaire was writing about me. My ignorance was fueled by a seat on the couch and a remote in hand that was most likely flipping away from the news and onto something comedic and mindless. The proof lies in the fact that I just can’t remember.

The word of God through the prophet Amos has much to say to us today: “I hate, I despise your religious feasts; I cannot stand your assemblies. Even though you bring me burnt offerings and grain offerings, I will not accept them. Though you bring me choice fellowship offerings, I will have no regard for them. Away with the noise of your songs! I will not listen to the music of your harps. But. . . let justice roll on like a river, righteousness like a never-failing stream!”