The Friday death of John Houghtaling conjured up a pop culture memory that’s appropriate to recall during Father’s Day weekend. You see, Houghtaling was the inventor of a delightful little device – at least I thought so – that I was deprived of ever experiencing during my childhood. . . thanks to my Dad.

First, a little trip down memory lane. Like many kids who grew up during the 1960s and 70s, we took summer vacations by car. The family sedan (and there were many of them. . . . most without air conditioning), would be loaded to the gills and we would head down the highway for what some years was a three day drive south to Florida. The antidote to the discomfort of three days with three boys stuffed in the backseat took many forms for me. There was license plate bingo. See how many of the states you can get on the drive down. That game might last into Maryland. . . not too far on a drive from Philly to the Sunshine State. There was the letter game, a little trick my mom would pull out of her bag to quell boredom. In this game, passengers get a point for each visual they spot outside the car that coincides with a letter of the alphabet. . . all done in alphabetical order. Finally, there was the fun of spotting the signs for South of the Border. Pedro always said we were getting close. Padre always said that we weren’t stopping.

But there was nothing that eased the pain of the trip like the stops. Lunch was always at a fast food joint. Sometimes we’d sit and eat. If we were already “making good time,” we might even eat while driving so that we could get further down the road than our planned overnight stop. They were the best stops. The motel. Here’s how it worked in our family: The first motel criteria was the coveted AAA rating. Second was a good price with “kids stay free” attached on the end. It couldn’t be – in his words – “highway robbery,” which by the way, I don’t ever remember actually experiencing. A Color TV, air conditioning, and a pool always made it that much better. This is how it went down in our family: We’d stop. Dad would pull in and go to the office while the rest of us waited in the car. He’d get a key and check out the room. If it passed his inspection, we were in. If it was questionable, mom would get out and give it a look. There were times when we’d pass on a place and head down the road to find something else. 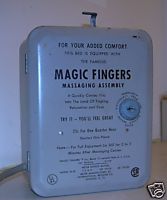 Finally, we’d find a place to sleep for the night. Bedtime came fast as my dad needed his sleep since he had done almost all the driving – which to this day still amazes me. But I can remember that almost every motel room we ever stayed in had that little gray box by the bed that would catch my eye as soon as I’d cross the threshold. It was the little gray box invented by John Houghtaling. Remember the Magic Fingers? That’s Houghtaling’s invention that promised “15 minutes of tingling relaxation and ease”. . . something I thought I desperately needed but never had the joy of receiving. First, the doggone thing cost too much. . . at least that’s what my parents told me. It was twenty-five cents. Second, it was dangerous. . . at least that’s what my parents told me. I’m not sure what the perceived danger was, but I remember it having something to do with the electrical cord running to the outlet and the possibility of electrocution. . . the chances of which might have been increased by our family’s earlier visit to the motel pool. By the way, the “electrocution” and “dangerous” reasons were also regularly used whenever I wanted to ride the electric pony or fire engine outside of the grocery store.

Redemption did eventually come. I believe it was while I was in seminary. Lisa and I took a little trip with another couple. Too poor and cheap to secure individual motel rooms, we wound up sharing a double-double. Imagine my surprise and delight when we crossed the threshold and there was the grey-colored box attached to one of the beds. Immediately, I claimed that bed as ours. I couldn’t wait. Finally under the covers with my quarter in hand, I dropped it in the Magic Fingers machine. What happened next was anything but magic. It was 15 of the most uncomfortable minutes of my life. My seminary buddy just laughed. Lisa climbed out of the bed to find 15 minutes of relaxation and ease next to the bed. I tried hard, but I couldn’t make it stop. My childhood dreams, which should have been coming true, were shattered. It was like jack-hammering concrete while laying down.

So, if nothing else, John Houghtaling gave me some great memories. If only my dad had let me try the thing when I was little. . . I wouldn’t have wasted so much time! You know what. He was right about it. You know what else he was right about? The grocery story pony. I finally rode one of those when I was in college. And it wasn’t all it was cranked up to be. Thanks Dad!