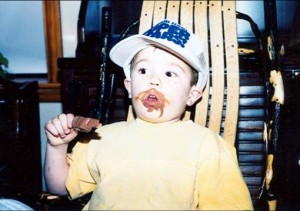 There’s a funny little story that gets told around our house every Father’s Day. It’s about something that happened in our family on a Father’s Day about nineteen or twenty years ago. It was a beautiful Father’s Day afternoon and our little family (only three kids at the time) was sitting at the kitchen table having lunch. Caitlin, Josh, and Bethany had just given me their homemade Father’s Day gifts. . . the best kind!

After making a big deal over these simple little gifts that were loaded with love, I asked the kids a question. “Do you know what the best thing about being your Dad is?” I can’t remember what the answer I wanted to them to come up with was. I think it was something like “I get to love and spend time with you guys!!” I simply wanted them to know how much I loved them. But before I had a chance to fill in the blank with the real answer, little Josh got an excited look and big smile on his face, indicating that he had the correct answer to my little quiz. He looked at me with a big smile and excitedly said, “Spanking?!?”

Now before you start thinking that I excessively spanked my kids and/or actually enjoyed it, think again. Oh, there were those times when discipline in our house took that form. In hindsight (no pun intended), I don’t think my spankings were effective in the least bit. That’s what my kids tell me. I know that to be a fact because anytime this story is brought up, what ensues is a discussion of how Dad’s spankings were a joke because they didn’t hurt. In fact, my kids laugh at me about those spankings today.

Josh’s answer was an indication that even at a young age, Josh was simply being Josh. He’s still funny like that. 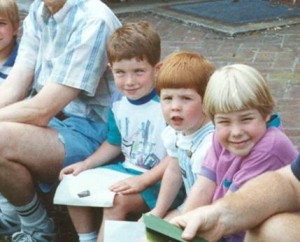 This coming Sunday (Father’s Day), we’ll reminisce again. That story will no doubt come up. And, I’ll most likely recite my litany of things that I most enjoy about being a dad. Greatest among all those things is the sacred trust of four children that I’ve been given by God. What an amazing gift. I hope and pray that I have been, am, and will continue to be a Dad who has exercised wisdom and good stewardship in my handling of this human trust. I’m also painfully aware of my shortcomings and failures over the years. . . of which there have been many.

Over the years I’ve relied on loads of outside help and advice as I’ve endeavored to fulfill my fatherly role. My dad’s words and example, input from fathers I’ve know, and some very helpful books have all contributed to the well of paternal wisdom from which I hope I’ve drawn. One of the voices that’s spoken most clearly into my life is that of Paul Tripp. If you’re around me long, his name always seems to come up. In a world full of “experts” who are ready and willing to dispense parenting advice, Paul Tripp is the cream that has risen to the top. He would humbly argue that all he’s done is passed on wisdom that’s been passed on to him. Still, he’s been a big help. Many of you have taken my recommendation and read his wonderful book Age of Opportunity: A Biblical Guide to Parenting Teens, which is in my opinion, the best parenting book ever written.

Whether or not you’ve ever heard of Paul Tripp or partaken of his parenting wisdom, I want to direct you to something that I think is pure gold. It’s an interview with Paul that was conducted back in 2000 by some folks over in Austrailia. I recently ran across this little treasure and was, as always, personally challenged as a dad, and very impressed. So impressed, in fact, that I decided to reprint the entire interview in our Summer 2009 edition of Engage. This is a freebie from CPYU that’s can be viewed and downloaded here.

In celebration of Father’s Day and as a gift to all the kids you know and love (even if they aren’t your own), download this edition of Engage and give the article – “What is Success in Parenting Teens?” – a careful read. Then, pass it on to other parents. If you’re a youth worker, this could actually serve as your Father’s Day gift to the dad’s of the kids in your group.

It’s my hope and prayer that in a world that’s ready to totally twist us around in our understanding of what it means to be a successful parent, this interview with Paul Tripp will help us understand the real truth about the best thing about being a dad. . . or a mom!