Eighteen years ago this month, we moved to our current home and community. Where we live now is an hour-and-a-half and what I erroneously thought was culturally light years away from our last home in the suburbs of Philadelphia. When we moved here, our oldest child was getting ready to start second grade. Our youngest was not yet even an idea. It was natural that we would take advantage of the new-found benefits of small-town life by allowing our kids to pursue their interests in the abundance of community-based activities for kids their age. So, they got involved in all sorts of stuff, much of it related to school and athletics.

One welcome benefit of our kids’ involvement was the opportunity for us to meet new people in our new area. When we moved here, we didn’t know anybody. But the hours spent on the sidelines or at our kids’ elementary school facilitated new relationships with young parents who shared kids of the same age. Never before in my life had I met so many new people so quickly.

Over the years, these friendships grew, mostly on the sidelines. Weekend tournaments, time spent working together at the concession stand, watching our kids play together, coaching with my new friends. . . . it was great. As we got to know each other, conversations led to discovering areas where we shared common values, hopes, dreams, and parameters for our kids. Over the course of the next 10 to 12 years, it was easy to fall into the assumption that as long as our kids were together, our values and parameters were being enforced. It was easier to believe that as long as my kids were at “your” house, they were being watched and being held accountable. 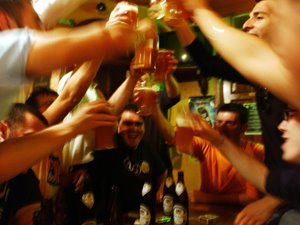 Sadly, we learned that what we come to take for granted isn’t always what is. By the time our oldest kids made it to high school, we began to hear more and more reports of local parents who were encouraging – rather than discouraging – the underage abuse of alcohol by providing a “safe” place for their own and other people’s kids to drink. Initially, I was saddened to learn that there were actually adults in our community who would do such a thing. Not long after, I learned that some of these people were people I had known and trusted for years. It made for several direct and uncomfortable discussions.

While nothing has served to convince me that this approach to raising kids is anything but just plain stupid, it does make sense to others. “They’re going to be doing it anyway,” the conventional wisdom says. “For that reason, we are going to be good parents and do our kids and the community a favor by providing them with everything they need – including the safety of our home – to drink safely in ways that keep them and others from harm. And hey, if your kid is lucky enough to drink at my house, I’ll be sure to confiscate their keys.” Thanks, but no thanks.

For years I’ve been scratching my head about conventional “wisdom” that promotes deception, immorality, drunkenness, law-breaking, and even – yes – alcoholism among our impressionable kids. Now, there’s some research that we’ve got on our side. The folks at Penn State’s Prevention Research and Methodology Centers have concluded that the best choice for parents to make regarding underage alcohol consumption is a zero-tolerance policy. According to researchers, there is no scientific basis to the widely held assumption that if we prohibit alcohol, it becomes a desired forbidden fruit. Neither is there scientific basis to the belief that providing alcohol to under aged kids encourages responsible drinking as opposed to abuse. The survey of college students found that those whose parents had a no-tolerance policy in regards to underage drinking were significantly less-likely to drink heavily in college. . . and vice-versa (pun intended).

The reality is that there are no guarantees in life. Our kids will make their own decisions. But we cannot forget that our God-given responsibility is to teach them right from wrong, healthy parameters, good decision-making skills, the very-real dangers of alcohol abuse, and respect for the law. Not doing so is bad enough. Doing the opposite is not only worse, but just plain stupid.