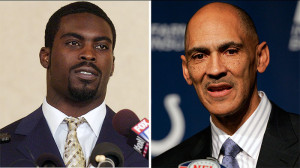 It’s been a weird few weeks for those of us who have spent years living and moving in the world of Philly sports. Okay. . . . I guess an argument could be made that any given hour in Philly sports is weird. If that’s the case, then these have been some of the weirdest. First, the Phillies go and mess with their team chemistry by signing Pedro Martinez, a pitcher who some might say is arguably the most arrogant man in baseball. We’ll see how that all works out. Then last night. . . during the Eagles’ first preseason game, we hear that the Eagles have signed the recently reinstated Michael Vick.

Interested in the way this thing plays out in a town like Philly, I’ve been tuning in and out all day just to hear what the pundits are saying both nationally and locally. But it’s not all the discussion in response to the move that’s caught my attention.

What’s caught my ear is how this decision was made. Granted, I’ve only heard bits and pieces from the people who are talking about how this all happened as they worked behind the scenes. From what I’ve heard, I’m impressed. While eating my lunch, I watched Eagle’s owner Jeffrey Lurie and his press conference. Without notes, Lurie spoke from his heart, candidly expressing his deep reservations about Michael Vick along with his cautious hopes for the good that might come out of this whole thing. I hope it wasn’t spin. While I might not share some of Lurie’s presuppositions about life, I can’t argue with his high regard for integrity along with his willingness to provide a window for a man who’s done terrible wrong to find some redemption. There are three things about Lurie’s decision that are worth a response.

First, Jeffrey Lurie is willing to call wrong behavior what it is. . . wrong. That’s refreshing in a day and age when all-too-often celebrity is used to excuse or overlook all kinds of immoral behavior. Lurie was appalled at what Michael Vick did and he found it to be disgraceful and despicable. He said so over and over.

Second, he spent hours questioning Michael Vick before making his “counterintuitive” decision. Lurie is an owner who’s very concerned about the culture of his team. He doesn’t want to bring in a player who is purely saying the right things about how he’s dealing with his past. He wanted to know that Vick is remorseful. In fact, Lurie stated that he was looking to see “alot of self-hatred,” something that shows that Vick was not upset over getting caught, but upset for what he had done. I like that.

And third, Lurie opened himself up to the advice of three people who he values the most in terms of integrity – Commissioner Roger Goodell, Andy Reid, and Tony Dungy. That last name really caught my eye. I’m not sure there’s a person in all of sport with more integrity than Tony Dungy. He’s been mentoring Vick since this all happened. Knowing what I know about Dungy, the guidance and advice he’s offering is straightforword, no-holds-barred, and Godly. If you’ve read Dungy’s books you know that he is committed to a “no excuses, no explanations” approach to life. I get the sense that if God is going to do something incredible in Michael Vick’s life, Tony Dungy would be a great human instrument to use.

I’m not sure how this thing’s going to play out. Only time will tell. If Micheal Vick doesn’t do one positive thing on the field for the Philadelphia Eagles, but he does experience redemption. . . it will all be a success. This could turn out to be a pretty good story.