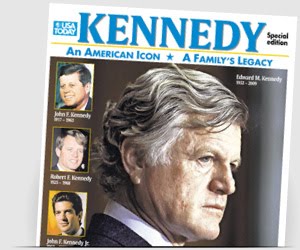 If you aren’t my age, you probably can’t understand my fascination with all things Kennedy. I think it happened when JFK was assassinated and I experienced it all as a 2nd grader. Sure, I had been a tourist at the Kennedy White House on a family trip several months before. But the Kennedy thing didn’t begin for me until that watershed moment in cultural and political history when the TV provided non-stop coverage of the events in Dallas. It left a deep and enduring mark on me, most likely because my 2nd-grade mind was trying to process the murder of the President.

Since then, I’ve read all kinds of books on the family, the assassination, and how the Kennedy’s have influenced culture and history. Part of my fascination has been invested in trying to figure out the fascination with the family. Ironic, isn’t it? Lisa jokingly tells people that when I get to Heaven the first question I’ll ask is, “Did Oswald act alone?” Several years ago I flew to Dallas a day early for a YS youth workers convention. I arrived late at night but managed to get up at the crack of dawn to spend the day at Dealey Plaza. I called home early in the morning and asked Lisa is she could guess where I was. “The grassy knoll,” she answered without flinching. She was right. She knows me well.

You might have guessed that I spent a good chunk of time last Friday and Saturday watching the television coverage of Teddy Kennedy’s funeral. My interest came from my fascination. I was never a fan. In fact, I grew up thinking Teddy Kennedy was an over-privileged and two-faced crook who was a living contradiction. Books, conversations, and my own observation of the man reinforced my opinion that he was most-likely getting into more trouble than any of us ever knew. When he did get caught, it was a combination of privilege, status, power, influence, and money that made for an easy out.

After processing Saturday’s events, I’m not sure where I stand in my understanding of Teddy Kennedy. I never knew him. The knowledge I did accumulate and the opinion I had was mostly shaped by the words and opinions of others. Sure, much of his admitted misbehavior was sorry and sad. But on Saturday, for the first time, I think I realized just how human Kennedy was. The funeral was filled with comments from people who knew him well. Predictably, nobody said anything bad. There were, however, numerous references to his ability to make mistakes and poor choices in his personal life. At one point, the presiding priest talked about redemption.

Just when I was ready to oblige my biases and stereotypes by concluding that the world might be a better place without Ted Kennedy and his antics, I got a tap on the shoulder. It was brought to my mind – not coincidentally – that I am a sinful and fallen human being who has a tremendous ability to make mistakes and poor choices. . . . and I do. In the eyes of the One doing the tapping, my combination of shortcomings make me no better than anybody else. If I think I am, then I am actually worse. And, I was reminded that I am totally indebted to the One doing the tapping for the unearned and undeserved gift of grace and redemption that I’ve been given.

Thinking about that brought to mind a fact that I found a bit discouraging. Over the course of my life I have from time-to-time been critical of Teddy Kennedy. . . both in my own mind and in my words to others. But I don’t think that I ever once prayed for the man. I realize there’s no excuse for that. There’s a much-needed lesson in there for me.