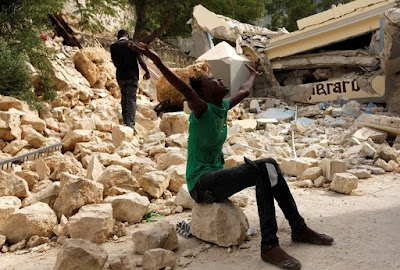 This morning, I woke up to harrowing picture on the front page of our local newspaper. It’s a photo of Cindy Terasme crying out after seeing the feet of her dead 14-year-old brother protruding from the rubble of his school in Port-Au-Prince.

Over breakfast with my friend Neil, we discussed what’s happening in Haiti and the response God desires from us. I couldn’t help but think of the words of Jesus. . . “to whom much has been given, much is required.” And lest I play the relativity game regarding how much I’ve been given (“I’m not as rich as Donald Trump so I must not have much”), I was then reminded of something I read a few weeks ago in World Vision President Richard Stearns’ book “The Hole in Our Gospel.” Stearns writes about how we should think about our worth in relative terms. We usually tend to assuage ourselves by looking up the ladder of wealth rather than down. He writes, “If your income is $25,000 per year, you are wealthier than approximately 90 percent of the world’s population! If you make $50,000 per year, you are wealthier than 99 percent of the world!” Stearns then goes on to remind readers that almost half of the earth’s population lives on less than two dollars a day.

This perspective is timely and necessary. Yes, much is required.

Last night Lisa told me that she had seen a news report on the $1 million donation being made by Major League Baseball on behalf of its 30 teams. I did some quick math and discovered that’s $33,333 per team. Then I got to thinking, what if my friends – all of whom fall somewhere in the upper 10 percent category mentioned by Richard Stearns – thought about reversing positions with the folks who are suffering in Haiti today? What if we were the ones mourning the loss of a brother or looking for medical help in order to survive? What would we hope the people of means sleeping in their warm, soft beds would do? I thought further. . . . what if the 1,673 people in our CPYU Facebook Group gave just $100 each to the Haitian relief efforts today? That would be $167,300! Or, as much as 5 of the major league teams are giving combined!

We all have at least $100 we can give. This is a time for God’s people to obediently shine. I want to encourage you all to give today. Find a responsible charity that will use your gift immediately in a responsible and stewardly way. If you’re not sure where to give, I would invite you to join us as we support the relief efforts of Compassion International. Just click on the Compassion banner at the upper left of this blog to make your donation.

This news will fade fast and we’ll be prone to make the error of forgetting as our comfortable lives continue. Let’s not let that happen. And let’s keep the nation of Haiti and those providing relief in our prayers.