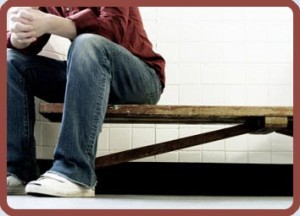 We’ve now experienced and felt it twice. Unless it’s happened to you, you have no idea what it feels like. I know I didn’t until it happened for the first time 17 years ago. We had packed up the car and driven about two-and-a-half hours from home to spend a week of vacation with out-of-town family. A few hours after going to bed that first night away, the phone rang. It was my neighbor calling at 2am to tell me that my house, his house, and a third house in our neighborhood had been broken into and robbed. After finally convincing me that he wasn’t joking, I spent the rest of the night on and off the phone with both him and the police as they systematically went through my house.

When the sun finally rose early the next morning, I hopped in the car and drove home alone to survey and clean up the damage. My kids were young at the time and I didn’t want them to see what someone had done to our house and their stuff. I’m glad I left them behind. I’ll never forget the helpless and angry feeling that enveloped me when I walked in the front door to the place that until then had been our family’s private sanctuary and safe refuge. Someone who didn’t belong there had been there. The people who did this had tracked mud all over the carpets and floors. Drawers in every room were pulled out of place with their contents thrown randomly all over the place. Everything was a mess. It was now my job to clean it all up while figuring out what had been taken. This should not have happened. We had been violated.

Those same feelings reared their ugly head again a couple of weeks ago when our car was broken into just a few short minutes after running into our church. This time my visible GPS had served as an invitation for someone to break a window. After rifling through every nook and cranny of our vehicle, whoever did this ran off with not only the GPS, but our cellphones, an extra set of keys, wallets, and more. Granted, we won’t leave our stuff hidden in the car anymore. . . lesson learned. But when we were escorted to the scene of the crime, that lousy helpless feeling I had 17 years ago reared it’s familiar ugly head once again. Not only was our stuff gone, but we now faced the daunting task of rebuilding and replacing that which was gone. We felt vulnerable knowing that someone had not only barged into our locked private space, but they now had the ability to do even more damage based on what they had taken.

Whenever I find myself in trying situations like these, I try to remember (but don’t always succeed) to stand back to gain perspective, reminding myself that this is all nothing compared to what some people face. This time, my thoughts were taken to the thousands upon thousands of kids who live among us in our fallen and sin-sick world while having to deal with being violated in one way or another. Divorce, sexual abuse, fatherlessness, etc. . . . all these things are like sneaky thieves who prey on unsuspecting victims who never asked for it in the first place, stealing their innocence and leaving them having to deal with tough stuff that just shouldn’t be. . . with the fallout pounding away at them for the rest of their lives.

1. What is happening in this young person’s life that shouldn’t be happening? and. . .

2. What is not happening in this young person’s life that should be happening?

It’s sad that these questions even need to be asked, but that’s a reality in a world that groans and cries out for redemption. And in order to represent the One who redeems, we need to do the asking so that we can effectively communicate His answers to the realities that exist. . . realities that can only be known if we’ve asked. People living in a world with broken selves that are repeatedly violated and violating can only find hope and healing through the Redeemer, Jesus Christ.