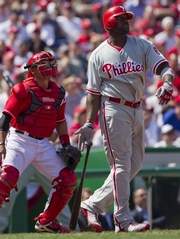 Opening day for my beloved Phillies happened a couple of days ago and for the first time ever, I was able to be there. Lisa and I took the short drive down to D.C. to see the Phillies take on the Nats and for the most part, it turned out just like we hoped it would. An 11-1 victory has us hoping once again that “this might be their year!” I know my friends who are Cubs fans are hoping the same thing. Watching Howard and Polanco at the plate along with “Doc” on the mound. . . well, it was quite a display. My highlight? The Ryan Howard rocket shot that passed me on the right.

The start of baseball season has not only become a nostalgic and much-anticipated event for me, but a time when I look around at the surroundings to see what I can learn about our world. Monday’s trip to D.C. prompted a flood of thoughts, most of them a bit frightening.

We took our seats early so that we could take in all the opening day festivities. One of the first things that I noticed through my ears and eyes was that it didn’t seem at all like we were watching a baseball game in D.C. In fact, it seemed more like a home game in Philly with two-thirds of the stands filled with a very vocal (not at all surprising) contingent of Phillies fans. I was seated up against the foul-line rail in the last section down the first-base line. I had two Nats fans behind me, and two in front. Everywhere else. . . . Phillies fans. But my vantage point and the friendly banter that ensued with the Nats fans seated behind offered a new perspective on Phillie fans as I looked at my hometown folks through the eyes of the people whose house we were visiting. We barged in and took over. Sports fans have most likely heard fans in Philly described as knowing more about the game than other fans, and as being more obnoxious than fans in other cities. I’ve always known that to be true. On Monday, I saw it from a new perspective as I sat with someone else in their house. . . and it wasn’t pretty.

As I continue to process what I saw and heard off the field, it’s left me a bit frightened. Lots of younger folks, filling themselves with lots of beer, and then boldly and without care or concern for anyone else but themselves, saying anything and everything to anyone and everyone. Not only was I embarassed, but it was cause for concern. I don’t think my concerns are indicative of my age. In other words, I’m not some grouchy old man. Instead, I think my concerns are indicative of our age. . . specifically, the age we’re living in. The loss of respect for authority, the underlying anger and mean spirit, the lack of concern for neighbor, and the overbearing sense of self-importance. . . . it all adds up in a mix that’s scary. For me, it became a window into the broken and sinful heart I share with all humanity and the things that that broken heart is actually capable of. Suffice it to say that when you get a little peek like that, it erases some of the wonder you might have about the horrible things that have happened throughout history, along with any certainty that we’ve progressed enough for anything like that to ever happen again.

Okay. . . so it was just a baseball game. But then again, I don’t think it was. I’ll keep watching culture. And I’ll keep watching baseball. Hopefully, the things that are good, true, right, and honorable will smother the stuff that isn’t.