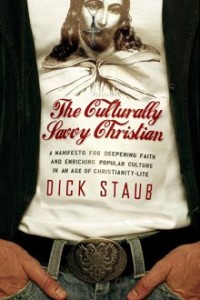 One of my favorite ministry friends is Dick Staub. How can you not love a guy who was basically kicked off Christian radio for pursuing his passion to represent His Savior in the Athens of today’s world? The first time I met Dick I knew I was in the presence not only of a kindred spirit, but of someone who God would use to make me a better follower. When his book Too Christian, Too Pagan went out of print, it bothered me (any publishers out there thinking of doing the Kingdom a big favor could pick it up). I still quote the little four-word title of that book and explain what it means. When we truly follow Christ, we become too Christian for our pagan friends, and too pagan for our Christian friends. Ever been there? Then he came out with The Culturally-Savvy Christian, his manifesto that I require all my undergrad and graduate students to read. Just this morning I emailed the syllabus for a college class I’m teaching later this year and there it was on the front page as one of three required texts.

This morning, on the day that Tiger Woods returns and that espn.com has billed in big bold letters as “THE WAIT OF THE WORLD” – (are they serious?!?!) – I opened my email to find an announcement about Dick’s latest blog over at dickstaub.com. This one’s titled “In the Land of Narcissists,” and it’s a good one. So I’ll step aside and encourage you to read some very bold and very true statements from my friend. And by the way, this is the type of Biblical thinking about life that we need to be pursuing ourselves and teaching our kids.

“How many narcissists does it take to change a light bulb? One. He holds the bulb while the world revolves around him.

Jesse James, a naughty narcissist has humiliated his wife and our collective darling Sandra Bullock. This after she won the Academy Award for best actress, and the same week told Barbara Walters that “her work got better because she could be both fearful and braver knowing she had her husband to go home to.”