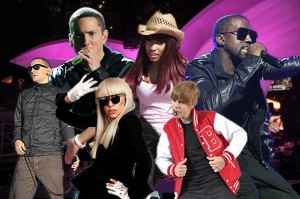 I’m going to come clean. I’m watching the clock as the last 40 minutes tick down until the start of an annual event I’ve been watching and telling youth workers and parents to watch for who knows how many years. I started watching in 1984. The media shelves in our CPYU offices hold copies of just about every edition of the VMAs, offering a video timeline into how the world of pop culture and music reflects changes in the values, attitudes, and behaviors of the emerging generations. I’ve got a hunch that if I went back through the archives in chronological order, I’d be surprised by how relatively tame those old VMA’s that stretched the envelope then would be by comparison. Where will we be in 10 or 15 years?

Tonight I’m hunkered down to watch the 2010 MTV Video Music Awards show. . . and truth be told, I don’t want to be doing this. I’m tired. . . tired of viewing this yearly peek into the soul of our culture through what I hope are eyes of faith that are faithful to the will and the way of my Heavenly Father. Doing so from that perspective can’t help but be frustrating. The scores of youth workers parents who always seem to protest my annual push to suck it up and watch know exactly what I’m talking about. If you love Jesus and love kids, it’s heartbreaking to see the brokenness, fallenness, and evil that’s not only peddled and promoted, but is the fruit of the ways we choose to go in our sinful and messed up world. We watch and we know: this is not the way it’s supposed to be. With the Old Testament prophet Habakkuk, we watch and find ourselves lamenting the fact that God’s ways are ignored, justice is not upheld, and the wicked surround the righteous. Hopefully, we hurt for our kids and we hurt for our culture. We see it when our youth group kids follow the lead of pop stars more than the lead of the Redeemer.

But in spite of this, I’m going to watch. I will watch because I’ve been called first and foremost to be a follower of Christ who is to be salt and light in this world in which I live. And to effectively serve as salt and light I must understand the nature of the darkness and decay. All of us who are called to minister to kids are by default called to be cross-cultural missionaries. Their world is not our world. Don’t believe it? Watch the VMA’s. What you will see will serve you as a mirror, reflecting back to you the map that’s serving kids as a guide through life.

So tonight, I’ve decided to watch, process in real time, and blog my thoughts as they enter my head. I have no idea what to expect. . . . well, I do have an idea. However, I would love to be pleasantly surprised. . . .

– So. . . Eminem is back. And in true Eminem style, he’s boasting in his own power and ability to pull himself up and make it back. It’s supposed to be all about me, isn’t it?

– In a nod to staying on the edge, this year’s VMA’s is being hosted by Chelsea Handler. Should be interesting. Her jokes and commentary are sure to be raw. And she begins by encouraging everyone in the house to be on their “worst behavior”. . . including using her opening monologue to egg on the relatively innocent and young Taylor Swift into all kinds of over-the-top behavior. In effect, she’s verbalizing what the show serves to do in the lives of its young viewers.

– Lady Gaga’s first win includes a shout out to the discharged soldiers who accompanied her to the awards. . . a political/ethical statement that’s in line with her views on sexuality. The soldiers she brought are all part of the Servicemembers Legal Defense Network, the national organization devoted to assisting those affected by the “don’t ask, don’t tell” policy of the United States Military. In terms of pop culture icons, Lady Gaga is perhaps not only the most popular artist out there (yes. . . have you heard your kids sing her praises? . . . which strongly makes the case for promoting integration of faith into all of life and the need to learn how to use the Scriptures to shape their reaction to music and media), but has perhaps the most influential pop culture presence in terms of promoting a sexual ethic and shaping our kids’ understanding of their sexuality. According to what she said tonight, her next album is titled “Born This Way.” We need to be ready to enter into the discussion.

-The VMA’s are a marketing event. Not only has Eminem returned, but the guys from Jackass showed up to promote their return with their soon-to-be-released 3D movie. And when they start pulling their stunts while presenting an award. . . even MTV has to pull the cameras back. Then there are the stars of the upcoming film, Social Network. Marketing. . . again.

– Is it me, or this Justin Bieber thing outrageously silly and out-of-control? One word – marketing. And it’s working. He’s captured the hearts and wallets of millions of the youngest music fans and their moms. Keep an eye on him. What will he be singing and doing when he’s 18?

-You might not be a fan of Usher, but you’ve got to love the sets. . . lighting. . . staging. The creativity and complexity bears witness to the image of Himself that God has put into human beings. . . the crowning point of His creation. We bring glory to Him when we create with excellence.

-The commercial for the new female fragrance Gucci Guilty. . . . ponder the name. . . ponder the commercial’s message. This is one worth talking about. If you decide to talk about it and are accused of being prudish. . . well, then talking about it was something that needed to happen. Our culture, for the most part, doesn’t think twice about this kind of stuff. It’s status quo.

-Who was Kanye West toasting? And why???? Kudos to him for admitting his mistakes from last year and seeking forgiveness from Taylor Swift. . . . who by the way, didn’t follow Chelsea Handler’s advice. Instead, she took the high road by offering forgiveness and redemption to West in her own performance. The standing ovation afterwards was well-deserved.

What do we do with what we see when we look at our world through the window of the VMA’s or other elements in pop culture?

First, we must put what we see and hear under the light of God’s Word. Can we celebrate and affirm it? Or, must we lament and challenge it? This step requires filling our wells with God’s Word, knowing the truth, and meditating on it.

Second, we must get on our knees for our kids and our culture.

Third, we must speak to it, being very direct with the kids we know and love.

And finally, we must be patient as we are faithful and obedient. We can’t twist people’s arms into thinking and living differently. We must love those who think differently as we wait on God’s Spirit to move whenever and wherever In God’s perfect timing.