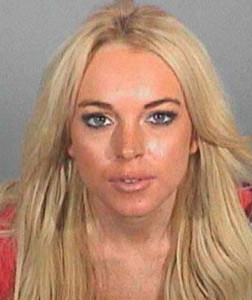 Her roller coaster life seems to make the headlines every day. And just when you think she’s got her life back on track, it all derails into an ugly mess one more time. Sure, Lindsay Lohan is now a 24-year-old adult, but her few years of adulthood have been built on the very shaky foundation of a childhood which was – like the childhood of most child stars – never really a childhood at all. These kinds of childhoods seem – more often than not – to be precursors for a miserable and maladjusted adulthood. Sure, Lindsay Lohan is now responsible for herself and she needs to take charge of her out-of-control life. . . a task which I’m sure is much easier said than done. But Lindsay Lohan also serves as an example of how incredibly difficult it is for an adult to connect the dots in a way that leads to a healthy adulthood, when all the dots of her childhood were connected in wrong ways when she should have just been allowed to be a kid.

As I read the latest on Lindsay Lohan over the weekend, I couldn’t help but think of the things child development expert David Elkind was writing twenty-five years ago in books like All Grown Up and No Place to Go and The Hurried Child. What Elkind knew then was that kids were being ripped off. What we know now is that Elkind was right, not only in his assessment of how kids were being ripped off, but in his predictions regarding how the robbery of their childhoods would effect them later in life.

Elkind’s message was simple and straightforward. What kids need is a time to grow. In other words, they need to be kids. What we give them in our culture is a push to premature adulthood. . . a push that can take many forms including things like over involvement in youth sports at younger and younger ages, along with thrusting cute little kids in front of movie and tv cameras before they’ve even reached the age to climb onto the school bus. Elkind says that our children wind up reaping what we’ve sown. The result, he says, is stress and its aftermath. . . including everything from early sexual activity to substance abuse to self-abuse to depression to suicide, and a whole lot more. I’ve always wondered if in Lindsay Lohan’s case, her substance abuse problems aren’t rooted at least partially in an attempt to self-medicate and numb the pain of her existence.

The more I watch what’s happening with Lindsay Lohan, the more I believe that she’s desperately searching for an answer to one simple question: “Who Am I?” She’s really no different than the rest of us.

The other night I had the privilege of hearing Derek Melleby, Director of our CPYU College Transition Initiative, address a group of teenagers and their parents on issues of identity. Derek has put together a wonderful seminar entitled “Identity Matters: The voice of Culture, The Truth of God.” As Derek ran through the pervasive, compelling, and convincing messages we hear from the voice of culture, I couldn’t help but think about how these messages have shaped, influenced, and confused Lindsay Lohan as she continues her quest to discover her own identity. How has she been influenced by “You are what you buy!” Or “You are how you look!,” “You are what you do!,” and “You are somebody if you are accepted by the right people.” How many of us have ordered our day-to-day comings-and-goings because we believe these lies to be truth?

Ultimately, the search for our identity is a spiritual quest. Alistar McGrath captures that reality in his book The Unknown God:

If there is something that has the power to fulfill truly and deeply, then for many it is something unknown, hidden in mystery and secrecy. We move from one thing and place to another, lingering only long enough to discover that it is not what we were hoping for before renewing our quest for fulfillment. The great certainty of our time seems to be that satisfaction is nowhere to be found. We roam around, searching without finding, yearning without being satisfied. The pursuit of happiness is often said to be one of the most fundamental rights. Yet this happiness proves astonishingly elusive. So often, those who actively pursue happiness find that it slips through their fingers. It is an ideal which is easily put into words, yet it seems to remain beyond our reach. We have long become used to the fact that the richest people in this world are often the most miserable, yet fail to see the irony of this. Perhaps it is just one of the sad paradoxes of being human. Maybe we will have to get used to the fact that we are always going to fail in our search for happiness. Part of the cruel irony of human existence seems to be that the thngs we thought would make us happy fail to do so.

On Saturday night, I loved hearing Derek offer the truth of God to those kids. . . a truth that contrasts sharply with and corrects the voice of culture. Derek said the answer to the question “Who Am I?” is quite simple: “You are a child of God.” For those who are in Christ, their identity is secure in Christ. Will there be struggles? Difficulties? Doubts? You bet. But we need to remember, “How great is the love the Father has lavished on us, that we should be called children of God! And that is what we are!” (I John 1:31).

Let’s pray that Lindsay Lohan would experience the redeeming, freeing, and life-giving love of the Father. And, that she would find the answers to all of her questions.