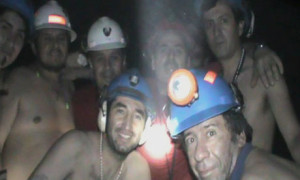 Early last August, shortly after returning home from my hospital stay, I reestablished my morning ritual that has always included a cup of coffee and the newspaper. One of the first news stories that caught my eye also grabbed at my heart. I had been thinking a lot about and praying for people who have it far worse so that I would maintain perspective on my own condition. That morning, I read about the 33 Chilean miners who had been victimized by a collapse. From time to time over the next few days I’d read a small story on efforts to find the men and the hope that they were still alive. Then, later in August, word came that a drill had reached the chamber where the men were, and they were still alive.

I started to imagine what it must be like to be trapped a half mile under the ground with no way out. I believe I would have gone crazy pretty fast. But stories emerged from that place in the ground about a chain of command that had been obeyed, food that had been carefully rationed, and how the men had taken care of one another during the time when they were lost with no idea at all if they’d ever be found. I thought about their families and the sliver of hope this new discovery had brought.

Then came the mobilization of a country’s resources to work to get these men out of the ground. Plans were made and I read that it might take until Christmas or some other time near the end of the year if all went well. Again, I thought about and prayed for them and their families.

Now, we’re hours away from the first miner being brought to the surface, and it’s October 12. According to what I’ve read today, experts say that the trip up the shaft will be fraught with risk and danger. One expert says it will be the most harrowing part of the ordeal for each of the miners. I’ve been thinking about and praying for them again today, imagining yet not even coming close to knowing what these hours must be like for everyone involved. If all goes well, the euphoria felt by all in a day or two will be unmeasurable.

The contrasts in this story are unbelievable. Moving from almost certain death to the very real hope for continued life. Thinking you’ll never see your family again. . . and then being reunited. Moving from deep darkness into bright light. Then, there’s the stuff they’ve done to survive. The cooperation. The care for each other. Even the arguing over who will be the last one up. . . each one saying that’s the place in line he wants to take.

There’s far more to this story that we’ll learn. I’m sure some publisher and screenwriter is standing by that hole in the ground with contracts and pens in hand. But to this point, the whole thing has been rather amazing to me. Even reading the accounts of the brilliant and talented people who have engineered the complex rescue effort screams out “Glory to God!” for the creative gifts reflected in the image of God each of these people was born with and has developed.

No, it’s not a story about youth ministry, kids, or culture. But it is a story about bringing “shalom” in the midst of terrible stuff – that universal flourishing and rightness that filled every nook and cranny of God’s good world before we decided we had a better plan for it all. In that respect, it’s a story that reflects what everyone of us, young and old alike, longs for every minute of every day. In a way, it’s a story about the hope we all have for our ultimate rescue.

Let’s pray that all goes well over the next few hours.