On Wednesday I had the privilege to speak at Houghton College to the school’s 1,200 students in chapel. My message to them was simple: “As young people redeemed by Christ and called to a lifetime of service to Him, resolve now to always listen twice.” This is the simple message that’s at the core of all we do here at CPYU. The Scriptures are clear – we are to listen first to God’s Word. But our need to listen doesn’t stop there. We are also called to listen to and discern the heart of the world. You see, opening our ears to understand the world allows us to more effectively communicate the unchanging Word of God in ways that answer the world’s great need in ways that the world can hear and understand.

At CPYU, we tune our ears into today’s youth culture for the sake of the advance of the Gospel. One youth culture issue we’ve been listening to in recent weeks has been unfolding right here in Lancaster County. A few weeks ago, our morning newspaper carried a story – which I blogged about – reporting on a local school district that decided to cancel the annual homecoming dance. The reason? After several years of issuing warnings to students, dance attendees continued to engage in increasingly dirty and suggestive dancing. Several years ago, CPYU issued a “Trend Alert” on this type of dancing known as “freak dancing” and “grinding.” Some people have correctly described this type of dancing as “having sex with your clothes on.” The behavior and the failure of students to obey respect the authority of their administrators is a clear indicator of the continued decline of morals not only among teenagers, but in the culture-at-large. 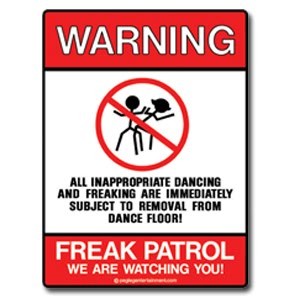 Shortly after blogging on the topic a few weeks ago, a blog-reader from Maryland emailed me a copy of the contract students are to sign if they want to attend their district’s Homecoming Dance. The contract includes these bullet points under the heading “Expected Student Behaviors”:

-The manner of dancing will be appropriate for a school function. Dancing such as moshing or slamming will not be permitted.

-Sexually explicit dancing is defined as the following:
-Freaking or grinding
-No intimate touching of the breasts, buttocks, or genitals that simulates sexual activity.
-No back to front dancing; no squatting or bending.
-No hands on the knees or on the floor with buttocks facing or touching a partner or in the air.
-No leg or hip grinding.
-No “making out” (over and/or prolonges public displays of affection).

Yesterday, our local paper ran a letter to the editor from a local high school student, Sally Canon, who endeavored to explain dirty dancing in today’s youth culture. Her words are worth reading, as they provide a wide open window into the way kids in today’s youth culture think about these matters. While you can read the entire text of Sally’s letter here, I’ve pulled a few sentences that I trust capture her thoughts and reasoning: “Parents, you have to understand this is what our generation has come to. This is us. There is no stopping it. . . . We don’t know any other way to dance. It’s also not our fault our music brings this on. . . . Students aren’t just going to go along with the rules of no grinding. They’re ticked, therefore, many are having parties homecoming night consisting of all the grinding they want and alcohol simply because they can’t grind at homecoming. . . . When our society’s values and morals are what they are, how else are you expecting us to dance? Schools can’t take this out on us for not knowing how else to dance and they can’t blame us for what our generation has become.”

While Sally tells us what her peers are thinking and doing, listening carefully to her words serves to issue several challenges to parents, churches, youth workers, and all those who are genuinely concerned about kids. First, we realize that those of us who are older need to think carefully about the examples we’ve provided to our children and teens. Second, behavior that we know is a fallen and sinful expression of God’s good gift of sexuality is no longer seen by kids as immoral and wrong. Rather, it’s normal, nuetral, and maybe even right. And finally, fewer and fewer members of the emerging generations are willing to take responsibility for their behavior. Each of these trends is a deeply troubling indicator of the changes taking place in the way our kids think, talk, and act. . . and what we’ve done – or maybe not done – to facilitate that. Perhaps most troubling of all is that each of these trends is also pervasive among our professing Christian kids, which indicates a disconnect between their stated beliefs and their real-world behaviors.

So, let’s go back to that challenge to “listen twice.” As Christ’s ambassadors, called and sent into this world, we are to be about the business of effectively communicating the life-changing Good News about Jesus Christ to a lost culture full of confused kids who are in desperate need of redemption. With that as the basis for why we are so committed to listening twice, what do you hear in Sally’s words? And how can we bring the light of God’s Word to bear on Sally and her world? Comments?

I encourage you to live a life of listening twice. . . . both to God’s Word, and to the world. And please continue to pray for us as we endeavor to serve our Lord by doing the same.