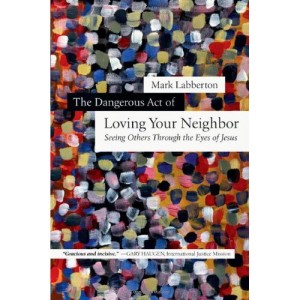 Last Friday I spent a chunk of the day sitting in the waiting room at a local doctor’s office. I had taken a family member to the gastroenterologist for a check-up that included a preventive procedure. Knowing I’d be sitting in that waiting room for quite some time, I took along a new book by Mark Labberton, The Dangerous Act of Loving Your Neighbor:Seeing Others Through the Eyes of Jesus. Throughout the morning, a slew of people came and went, something I became consciously aware of as I read the chapter titled “Paying Attention to Paying Attention.”

Here I was, reading about Jesus’s heart for justice and the poor, and I decided to follow the chapter title’s instructions by paying a little more attention to my immediate surroundings in light of the world’s great need. These days, when I think of the poor, I think first about 14-year-old Ibrahim, our Compassion child who lives in the Mathare slum in Nairobi. I’ve smelled, touched, heard, seen, and tasted where Ibrahim lives. . . if only for a few hours. Ibrahim, however, has the poverty of the place filling his young senses 24/7.

And so my mind wandered back and forth between Ibrahim’s Mathare and the place where I sat. It was cold and rainy in my part of the world. But I sat warm and dry in a nice soft waiting room chair. I thought about the fact that I was there because I had the ability to travel by car, I had the luxury of insurance coverage that paid for a very expensive preventive procedure, and I had the time to give because I wasn’t constantly consumed with securing my next bite of food or bucket of water to sustain my family. Across from me sat a water cooler filled with clean water. . . available at the push of a button. On the table in front of me sat a variety of magazines, including this year’s edition of the Sears Wishbook. . . a catalog filled from cover to cover with the latest toys. As I listened to the many discussions taking place in the room, I was struck by what people were talking about. One man was telling his wife about his need for a new pair of bowling shoes. His old ones were worn out. A teenager complained to her mother about the fact that she had already gone 9 hours without food in preparation for her procedure. A pair of women sitting behind were commenting on the raspberry cheesecake and German chocolate cakes pictured in a magazine. Another family talked about their plans to go out and get ice cream once dad was done with his procedure.

I was blown away by what I was hearing as I held that book on justice in my hands. It was all normal everyday stuff. In fact, it was the stuff of my own normal everyday conversations.

And then I thought. . . I really do have a lot. Reality is, 98 percent of the people in the world are worse off than me. . . . something I quickly forget in my quest to pay attention to meeting the needs of me, myself, and I. That reality means that I’ve got some God-given responsibilities.

And so I continue to wrestle with some of these important questions. I wonder where it will lead. Wherever it leads, I know that if God is in it, the destination is going to be a pretty great place. I’m learning that the world beyond my OK world isn’t as OK as I’d like to think. I’m learning that living in my OK world means that there’s some divine responsibility on me regarding how I relate to those who have less, little, or nothing.

I’m looking forward to learning more about seeing the world through the eyes of Jesus.