Sadly, one of the most memorable moments from a childhood of Sunday mornings spent in Sunday School had to do with a movie. I was part of a small and motley crew of 4th grade boys – I think there were maybe only six or seven of us – who met for class on the stage in the church basement. It was always a good day when we were released from behind the confines of the velvet curtain to combine with the other classes, especially if we were being treated to a movie.

On this particular morning we were with the adults, even though the cinematic offering wasn’t one of the then-famous Moody Science Films (anyone remember those???). Sometimes, Sunday School movies provided only half the entertainment for little guys like me. The other half took place around the 35mm projector as an army of men would work by committee to figure out why – all of sudden – there was no sound. . . or even more entertaining, why they couldn’t get the film to stop losing its loop, which always resulted in some stuttered skipping and the inevitable shutdown.

I don’t remember much about the movie that morning except for this. . . it was a gripping drama. The plot centered on a woman who was in hospital bed dying. The climax came as a group of Christian friends stood around her bed praying. Then, without any warning at all, the soundtrack crescendoed and the near-death woman snapped out of her coma. She immediately sat up and began to sing operatic praises to God. . . you know. . . just like it happens in real life. If I remember correctly, a few people in the room let out a well-deserved moan. If they didn’t, they should have. 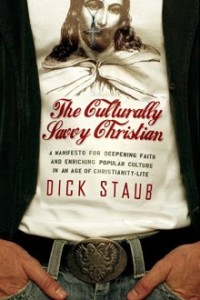 Last Monday, a conversation I had got me thinking about all the “Christian” stuff of my childhood that was really nothing more than cheese. I’m teaching a Youth Culture class at the Evangelical Theological Seminary and I decided to treat the students to a Skype interview with my buddy Dick Staub, author of several books included some required reading titled “The Culturally-Savvy Christian: A Manifesto for Deepening Faith and Enriching Popular Culture in an Age of Christianity- Lite.” I asked Dick to tell a little bit of his story and he almost immediately – to my delight – launched into a graceful yet blunt analysis of how we as Christians have embraced and worshipped a non-biblical dualism that results in the false construct of a world divided into the realms of the sacred and the secular. He spoke about how we have worked to create a parallel Christian sub-culture, which in my estimation does a much better job of turning out cheese rather than turning out good and engaging art, film, and music.

The conversation was timely as just a few days before I had read Roger Moore’s review of the newly released (and highly publicized among Christians) film, “The Grace Card.” In all fairness, I have not yet seen the film. I’m not sure if I will. So, please understand that my comments here have nothing to do with my response to the film. Rather, they have everything to do with Roger Moore’s review of the film, and how they relate to the genre of “Christian” art in general. 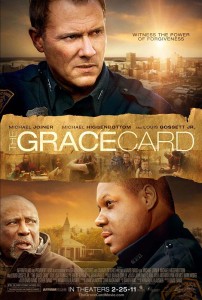 Here’s a small sampling of what Moore writes. . . and it’s stuff that makes me wonder why we try to tone down life, and then think it will be appealing and engaging. . .

“One depressingly common thread among faith-based films is the way conflict is watered down and life’s rough edges are often scrubbed off. It’s OK to put out a movie with a message. But rendering even potentially dramatic stories so inoffensive that they bear no relation to reality makes for middling drama. . . . ‘The Grace Card’ has drugs, cops and race as ingredients. But the eggshells the screenwriter and director walk on distance the story from the reality it aims to imitate. And that robs this tale of loss, grief and redemption of its punch. . . . The police work in an ostensibly rough town like Memphis has been utterly sanitized for our protection. The performances are competent, but fall far short of compelling. What could have been a moving if unsurprising story of a bitter, lost soul finding forgiveness and redemption fails to move in the least thanks to filmmakers too timid to play the cards they dealt themselves.”

During our interview, Dick told the students about his recent trip to Sundance, where he viewed 26 films in six days! (That’s a lot of Milk Duds!) He referred us to his blog entry on his experience, “Spirituality is Star at Sundance,” preparing us for lots of not-so-nice stuff if any of chose to view the films he was recommending. The fact that a discerning film buff and cultural critic who happens to be a Christian had to issue a warning. . . well. . . that just goes to show that in our effort to fill our hearts and minds with cheese, we sometimes turn ourselves away from the truth and come off looking ridiculous rather than real.

The Scriptures are true. . . and sometimes very ugly. I’m especially glad that God has chosen to come into the ugliness of my own life and sweep my story (which is still very ugly) up into His. Maybe if our story-telling would do the same, then the reviews might be better.