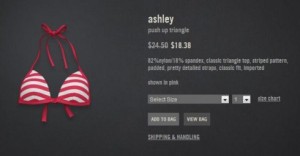 You know you’re living in a brave (or ridiculously stupid) new world when one of your college buddies sends you a link to a story about a trendy and always-pushing-the-envelope clothing company and how they’re now marketing a push-up bikini top filled with padding that’s marketed to girls as young as 7-years-old. Ambercrombie & Fitch is probably thrilled with all the free marketing they’re getting this morning from all the controversy over their “Push-Up Triangle” that’s now been changed on their site to the “Striped Triangle” bikini top. I got the article on Saturday. It’s been interesting to watch what’s happened since as the story has gone viral.

I guess you can get away with creating and marketing things like this in a world where the objectification of females and the sexualization of just about anything and everything has been going viral for years. Proof of our changing standards lies in the pudding of debate that’s stirring over the bikini top. The fact that we are even arguing amongst ourselves over whether or not this is appropriate/inappropriate – or more specifically moral/immoral – is most telling. Is there really anything to debate here?

Let me ask another question about this issue. I’m wondering this. . . did the folks who created the “Push-Up Triangle” ever even consider the fact that what they were doing could be over-the-top, controversial, inappropriate, or even immoral? Think about it. Maybe what we’re seeing is not the result of some carefully crafted marketing scheme designed to spread the word by getting everybody all worked up . . . although I’m fully cognizant of the fact that it might be. Instead, could it be that what we’re seeing is the work of a group of young designers/marketers at a company where everyone has been so nurtured and socialized throughout the course of their lives – lives spent swimming in the soup of youth culture – that what they’ve done is to them, normal and right? And are they as stumped by the response to what they’ve done as we are by what they’ve created?

Could it be that the “Push-Up Triangle” is the fruit of years of slow-simmering in a youth culture stew that’s going to flavor things in this way?

Here’s a little exercise for you to participate in as you consider this story. My wife pointed out that on this morning’s Today Show, they ran the following story on the Abercrombie scandal. But just before running the Abercrombie story, they ran another story on a sex scandal involving the grown-man who’s the heir to the Johnson Wax fortune and charges filed against him for sexually abusing his teenaged step-daughter. Give them both a look. . . and then think.

Visit msnbc.com for breaking news, world news, and news about the economy

Follow this link to check out the story on the sex-abuse case.