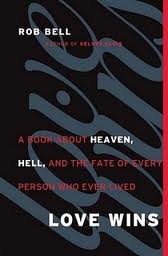 Okay. . . so I finally read Rob Bell’s controversial new book, Love Wins, over two weeks ago. Rather than blogging my thoughts immediately after turning the last page, I had to let it all simmer. It had to simmer because I think that responses to these kinds of things must be thoughtful, and thoughtfulness is usually trumped by haste. At least, that’s the way it is for me. I guess another way of saying that is that I didn’t want to put my foot in my mouth. I also needed time to sort out my thoughts on what I had just read for the simple reason that the book left me very, very confused. . . which I think may be the biggest issue with the book (more on that later). So here goes. . . Rob Bell. . . after reading Love Wins.

First, I want to repeat the mantra many have already been reciting regarding this book – Don’t form or trumpet an opinion until you’ve read it. That’s the problem with the blogosphere at times. Lot’s of words with very little or absolutely nothing to back them up. That’s dangerous.

Second, yes, I need to say something. I’ve had a few close friends ask me if I want to get in on this debate. Many are staying away because there’s already too much division and infighting in the church. I agree. But in this case, there’s far too much at stake. There’s too much at stake at the very foundation of our theology. There’s too much at stake in terms of the church, particularly among those who are most easily influenced or most deeply discouraged – people who are most likely to throw the baby out with the bathwater. That’s why I think the debate is needed and healthy.

Now. . . about the book. . . let me begin by citing some positives. A couple come to mind. First, the book – in true Rob Bell style – spends alot of time asking questions. That’s a good thing. Bell repeats oft-asked questions about the Church, Christians and their conduct (which is flawed. . . simply because we’re flawed), and theology. I grew up as part of a generation that was often “shushed” for asking too many questions. What results is a lack of answers, confusion, and great frustration.

The second positive is Bell’s treatment of Heaven. While some might not like my use of the word “doctrine,” I’ll still use it when I say that Bell’s doctrine of Heaven offers many needed correctives to the crazy non-Biblical ideas that we’ve come to believe about eternal life after physical death, about what it means to live Christianly on earth while we’re still alive, and about the dangers of an “entrance understanding” of the Gospel. The restored earth is something that we have to look forward to. . . not some cloudy existence on streets of gold. If we believe in the latter, we’ve spent too much time watching The Wizard of Oz and not enough time in the Scriptures. In addition, Bell has alot to say about what it means to be Kingdom people who actively live out the will of God during out earthly lives. . . which is, by the way, not a train platform we wait on between the day we come to faith and the day we die.

But what about Bell’s treatment of Hell, the issue that stirred all the controversy in the first place? Let me be blunt. . . I’m not sure I have any idea at all about what Bell believes. Like many others, I want Bell to be clear, telling me where he stands on Hell and whether or not he’s a universalist. I’m not sure if Bell is capitulating to an audience that embraces tolerance and diversity to the extent that he does nothing but dance around the issue and he doesn’t want to offend, or if he has no idea where he stands himself. Which is why anyone who writes needs to be clear, especially if you’re writing on a topic that is pivotal to one’s clear understanding of eternal things. Everyone in your reading audience – critics and supporters alike – must be able to walk away with a clear understanding and knowledge of what you just said. And if what you just said isn’t clear, then you have to go out of your way to explain yourself. The problem with this book is that before Rob Bell’s position on Hell can be challenged, Rob Bell has to clearly state his position on Hell. As a pastor to a flesh and blood congregation of thousands, and as a literary pastor to hundreds of thousands of others, he has a great responsibility to be clear. . . especially when many in his audience are so fed-up with the church that they are looking for difficult doctrines to deep-six.

So, to those who have read the book. . . Am I right in concluding that Rob Bell is asking us to jettison years and years of deep, responsible, and trustworthy theological inquiry? Am I right in assuming that he’s redefining “historically orthodox?” Am I alone in being very confused by a book that left me saying “Yes!”, “NO!”, and “WHAT????” over and over again? Am I wrong to assume that Bell desires to soften or even remove the offensiveness of the very Gospel that we’ve been told will be offensive to many? Am I wrong to assume that Rob Bell – who in the book cites the passage where Jesus speaks about those who cause the children to stumble – might in fact be leading a host of young and impressionable Christians (theological children) to stumble?

I wish that what Rob Bell is teaching about Hell was true. In my humanness, I wish with everything that’s in me that the Scriptures didn’t include anything on the dark destiny after death. Thinking about it doesn’t make me feel very good. But that’s where I have to stand back and simply say, “Not my will or desires, but yours Lord.” Then, that’s what I need to believe and that’s what I need to teach.

In their 1979 book, Cultural Anthropology: A Christian Perspective, Stephan Grunlan and Marvin Mayers spoke about the need for believers to become more aware of the multicultural world that was starting to unfold in new and big ways. That’s the world we now live in. They said that the best way to respond to this new world was a posture of “cultural relativism.” They advocated for a “cultural relativism” that was coupled with “biblical absolutism.” They wrote, “Thus the culture defines the situation, but the principles for behavior are found in God’s Word. Indeed the Bible is the absolute authority for all cultures, but it must be applied to specific and relative cultural forms.” When I thought about what Grunlan and Mayers wrote, I got the feeling that we’re now living in a time where “biblical absolutism” is sometimes quickly jettisoned when it rubs up against our personal/cultural realities and desires in the wrong way. Something has to win. And for all the good stuff that’s there in Rob Bell’s book, I’m wondering if it isn’t love that wins, but something else.

For those who are taking the time to continue to responsibly sort this whole thing out, let me make a couple of recommendations. First, you need to read Kevin DeYoung and Ted Kluck’s great book, Why We’re Not Emergent (By Two Guys Who Should Be), particularly the first chapter. The authors talk about the tendency among emergents to believe that the destination matters little. The journey is the thing. I’m wondering if that’s not a bit of what’s happening with Bell and his book.

And to my young friends, particularly those who are in youth ministry and who are fans of Rob Bell. . . tread carefully here. . . for the sake of the Kingdom and your kids. . . tread carefully, thoughtfully, prayerfully, and with the Scriptures as your guide. There’s much at stake, and it’s your responsibility to see to it that the truth is communicated and communicated clearly.