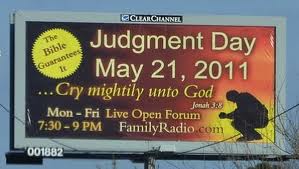 “Hey, that’s my 29th wedding anniversary! Should I make dinner reservations or not?” “Are you kidding me?!?!” “Could they be right???” “Oooh. . . I could write a funny blog on this!” I’ll admit it. . . those are just a few of the thoughts that fired through my head when I spotted the billboard last Saturday.

I was in Johnstown, Pennsylvania to visit family for Easter and I was driving down the steep hill on Southmont Blvd. While sitting at the stoplight across from Murphy’s (the best place in town for wings, by the way), I looked up and saw the billboard. I had to read it a few times as I had no prior knowledge of or context for the ad’s message. It seems that Jesus is scheduled to return on May 21. Still, I realized I had been down this doomsday road before.

Ironically, my most significant prior journey through a declaration of Christ’s return happened thirty years ago in this same town. I was doing campus ministry with a couple of other guys. One of the guys – who had not been properly theologically vetted by our campus ministry group – was the newest member of our trio. With deep passion and commitment, he quickly informed the other two of us shortly after his arrival that the Lord had told him that we should shift the focus of our ministry from one of evangelism and discipleship, to preparing students for the imminent return of Christ, including some survivalist techniques. Remember, these were the days when the old film A Thief in the Night was being used to literally scare the hell out of youth group kids. These were also the days when Hal Lindsey’s book The Late Great Planet Earth was a best-seller. When I was a college freshman, the combination of starting (not finishing!) to read that book and then watching the film at a local Baptist church. . . well, let’s just say it led to a series of sleepless nights for me and my roomates. Now, as a young twenty-something doing ministry, I was faced with going against the prophetic word of the Lord as recieved and delivered by a co-worker. In fact, our fellow campus minister had just found out that his wife was pregnant with their first child. He also happened to be reading through the book of Isaiah at the same time. Somehow, his eyes landed on Isaiah 8:4, a verse he believed the Lord was using to inform him (and nobody else, mind you), that He (Jesus) would return after the couple’s baby boy was born, and before that baby boy would speak. Even though the context was horribly skewed, my pushback still felt like I was arguing with God.

When my co-worker refused to yield to arguments regarding his misuse of Scripture, we then turned to arguments about whether or not we can, in fact, know the time. Our appeals to the words of Jesus in Matthew 24 and 25 also fell on deaf ears. It seems that the day and hour were unknown to everyone but this guy. Finally, I started praying that the matter would be ended with him failing the test of the prophet. Just like Deuteronomy 18 says, a self-proclaimed prophet is a false prophet if anything he says does not come to pass. I figured we had two shots here. One, his wife would give birth to a girl. . . which would put the matter to rest in a couple of months. Or two, their boy – if they had a boy – would start speaking before Jesus comes back. Winds up that “it’s a girl!” was the best news we got! I congratulated the new father, and then quickly told him that he was a false prophet.

So, I (as a Christian)look at that billboard with great skepticism and shame. My understanding of what is so very clear in the Scriptures tells me that “yes,” Jesus will come back someday to make all things new. I long for that day. But until then, it’s not my job to focus on doing the math for the simple reason that I’ve been charged with other responsibilities (like being a faithful and obedient follower of Jesus). . . and the math can’t be done. Which is why I feel shame for the ways we throw this stuff out there for the world to see.

Still, it’s not out of the realm of possibility that Harold Camping could have guessed right. We’ll see.