I love to get kids talking about all the stuff that saturates their world. . . stuff designed to sell them on a way of looking at, understanding, and living life. Thinking Christianly about these things is all a part of being a faithful and obedient follower of Jesus.

For a few years now, we’ve been cranking out stuff that gets them talking about music, TV, film, and advertising. One of the tools we’ve been creating are discussion guides on what we call “culture images.” Kids see these pictures every day. . . thousands of times a day, in fact. Why not think about them and talk about them? Those of you who are signed up to get our regular weekly e-upate have been getting these downloadable discussion guides. 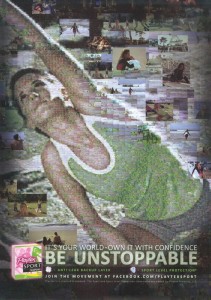 Today, I thought I’d pass on a guide that I recently wrote for, of all things, a Playtex Tampon ad. Why. . . because this is a picture and ad that tells a story. And because it’s appeared in all kinds of teen magazines, it’s worth talking about. Go ahead and give it a read, and it you want to download it in a pdf format, just click here.

They see thousands of them a day. . . advertisements that is. And the marketing blitz hitting our kids from every direction is about a lot more than just selling product. Ads tell stories, appeal to emotions, and sell ways of looking at and living life. Marketing sells us goods, services, and worldviews. That’s why even when our kids see ads for products they will never even consider buying, they could still be buying the ad’s worldview.

That’s certainly the case in the highly competitive world of Tampon advertising. After all, these are products every girl and woman uses. With lots of competing brands and styles on the market, the jockeying for brand loyalty while girls are still young is intense. Tampon marketers work hard to create ads that catch attention, that connect with the real-life experiences of teenage girls, and that push all the right emotional buttons.

Playtex recently launched a new online, print, and broadcast campaign for their line known as Playtex Sport Tampons. The online version of the campaign features a Facebook page where users can interact and create their own photo mosaic, much like the one featured in one of the campaign’s print ads that has appeared in several teen girl magazines.

The ad features a photo mosaic made up of several photos of girls involved in strenuous physical activities, including surfing, diving, and yoga. Readers are told that “It’s your world. Own it with confidence. Be Unstoppable.” Then, they are invited to “join the movement.”

Because the ad is for Tampons, this is one that’s better discussed with adolescent girls, although a mixed audience that includes mature teenage boys could be productive. Show students the ad and ask them to offer opinions on what the ad is selling – not the product it’s selling, but the worldview. Ask them what values, attitudes, and behaviors are reflected in the ad campaign’s slogans. Ask them if they agree or disagree with the ad’s message.

Then use the ad to discuss the following topics:

Community: Is it possible for someone to pursue individuality and take control of their world in a way that promotes and facilitates Christian community? What problems can occur when someone chooses to take control of their world and live by their own rules? How does living life as a servant of Jesus Christ in selfless service to others mesh with believing that “it’s your world” and the fact that you should “own it with confidence?”

Aspirations: As you think about your future, what role do you think you play in determining who you will be and what you will do for the rest of your life? Where should people go to discover who they are to be and what they are to do for the rest of their life? What it does it mean to “seek God’s will” for your life? Are there any dangers to living life by your own will and by your own rules?