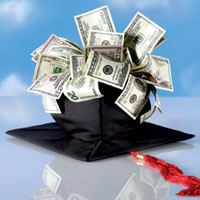 In about two hours I’ll be sitting in a college office with my 18-year-old son. It’ll be a give and take with an administrator on class placement, course selection, and major possibilities. At this point, he hasn’t centered in on anything. Not unusual at all for a kid his age. I’m praying and wondering about where he’ll land, what he’ll be doing, etc.

At this point, I’m much more concerned about the way he approaches the process, as opposed to the final outcome. My concern is rooted in the pressure I’m sure he’s feeling regarding which foundation to stand on as he makes these important choices. Case in point. . . the story that appeared on the back page of our newspaper this morning under the headline, “New study tells students if majors are worth it.”

So I read through the story on this first-of-its-kind study and report from Georgetown University. The first line reads: “The choice of undergraduate major in college is strongly tied to a student’s future earnings, with the highest-paying majors providing salaries of about 300 percent more than the lowest-paying, according to a study released Tuesday.” I read on to learn that college graduates make 84 percent more over a lifetime than those who only have a high school diploma. I also discover that different majors have different earning power. For example, a Petroleum Engineering major will make about $120,000 a year, as compared to Counseling Psychology majors who will make $29,000 annually.

So let’s think about the implications of this. First, it’s another sign of our cultural times. Earning power is quickly becoming the primary motivator for vocational choice and pursuit. Second, that means that calling and giftedness might not play into the mix very much at all. Third, the desire to serve others throughout the course of one’s lifetime might be eclipsed or squashed because, after all, “what kind of living are you going to make doing that?!?”

As a Christian, matters of unique God-given giftedness and calling should always be my primary motivator and foundation for my vocational pursuits. I want to use what I’ve been given to the glory of the One who gave it to me. We’ve already got loads of middle-aged people who are unhappy in their jobs. . . maybe because they launched the vocational endeavor from the wrong launch pad. That’s not who I want to be.

If choices are made primarily on the basis of earning power, then we’re about twenty to thirty years away from seeing this generation of students suffer the consequences of living as square pegs trying to force themselves into round vocational holes. By then, they’ll suffer in those jobs while hanging on until retirement. This reality, by the way, might just be the thing that would drive a forward-thinking student today into majoring in counseling psychology. After all, there’s going to be a lot of unhappy people in 30 years. . . people who will be willing to pay some of their hard-earned money to have someone listen to them. Maybe counseling psychology will be where the money is after all.