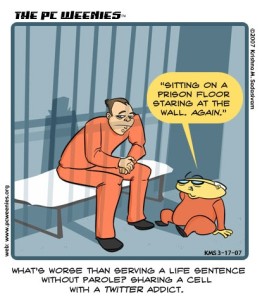 Later this month I’ll be hunkering down with a group of youth workers for about 150 minutes at The National Youthworkers Convention in San Diego. During those 150 minutes I’ll be sharing for the first time some of what I’ve learned during my five months of concentrated research on the Digital Frontier and how it’s affecting us and our kids in a brand new “Digital Kids” seminar. I keep having to remind myself that I’ve only got 150 minutes in San Diego because I’m still hunkered down here on the home front. . .for another 4 weeks. . . compiling research and writing the seminar!

One of the principles that keeps coming up as I’ve been researching is what Marshall McCluhan prophetically wrote about back in the 1960s when he worked to convince us that “the medium is the message.” McCluhan would agree that media’s content does shape us. But the media itself alters our lives in huge ways. For example, the invention of printing meant that we no longer had to commit things to memory as books and the knowledge they contained on their pages was only an arm’s length away. Make sense?

That said, we must wisely and Christianly consider how the media/technology glut that’s flowing out of the cultural fire hydrant in today’s world is shaping us, changing us, and sometimes messing us over.

In the midst of all this I haven’t been able to shake the fact that Twitter offers a prime example of how careful we must be. Quentin J. Schultze wrote his Habits of the High-Tech Heart: Living Virtuously in the Information Age four years before Jack Dorsey created Twitter in 2006. Dorsey’s Twitter has morphed into “Exhibit A” of what Schultze calls our “succumbing to informationism: a non-discerning, vacuous faith in the collection and dissemination of information as a route to social progress and personal happiness.” Long before Twitter even existed, Schultze wrote that the dissemination of information has become “an incessant noise that repeatedly diverts our attention from greater matters.” For the Christian, that’s something we need to recognize and remedy through redemptive use of things like Twitter. No, we don’t need to condemn Twitter to Hell. Rather, we need to smack some sense into our Tweeting fingers so that our use of the micro-blogging platform brings honor and glory to God, rather than honor and glory to self. . . or the kingdoms of the world, the flesh, and the devil.

Consider these words from Schultze’s Habits of the High-Tech Heart: “More and more people have the power to exchange messages and access databases, but fewer people seem to know what life means or how to live it well. . . . Instead of knowing well, we spend more time merely messaging – quickly sending and receiving email missives, downloading and uploading digital files, and surfing through cyberspace. When we message too much, we begin to lose intimacy with others, the natural world, the Creator, and even ourselves. Faster messaging can be instrumental good – such as getting stock market quotes more quickly – but it is far less likely to be a moral good. Morally conducive forms of knowing, such as conversing and contemplating, are lost, thoughtful, and personal. . . . An overdependence on messaging reduces human communication to an instrumental means of satisfying our own immediate desires.”

So, I think I’m going to get bold in San Diego. . . and Atlanta. . .and elsewhere. I may say some pretty direct things that I – first and foremost – need to hear. As Christians, we are called to stand apart. . . to be in but not of the world. . . to use technology and media structures in ways that honor and glorify God. . . to be obedient and redemptive. . . to seriously and carefully consider every new thing that comes down the pike rather than jumping in with reckless abandon void of forethought. . . to model all this for the kids we’ve been entrusted with. . . kids who are only beginning life in a world that will only get more technological and information-based as the years pass. I might be laying my fingers out on the table and invite you all to join me. . . and then we’ll share a much-needed smack.