Buried in a sea of seminar research and writing, my mind wandered today while writing a little section on social networking and how it feeds our Narcissism. We love to let other people know what we’re doing . . . every little detail. Oops. . . I just told you I was writing a seminar today. Still, there’s a point. As I was thinking through the sometimes ugly ways our hearts and desires connect to and use (maybe abuse is a better word here) social media tools, I got to thinking and writing about liking to be liked. You know. . . the little “like” button on Facebook. . . a brilliant idea by the way. Going places where I’m always going to be liked is pretty doggone desirable! Why isn’t there a “dislike” button? For the simple reason that such a button wouldn’t serve us well. For example, Lady Gaga’s Facebook page has over 43 million “likes”. . . and not one “dislike.” Who would have thought?

I got to thinking about metrics and numbers and how we now rely on them to gauge our success or failure. We do that in the church you know. Twenty-five years ago I came out of a day spent at a National Youthworkers Convention wondering where I stood on the youth ministry success/failure scale. A series of firsthand and overhead conversations that day always came down to the number of kids in your youth ministry. I’d answer the question with a number and then wait for a response. . . which could be read through words, tone, and body language as to whether or not the other person saw me and our ministry as successful or not so much. A couple of weeks ago I had a conversation with a pastor who told me the size of his church thinking that size matters quite a bit in my mind. Sure, if I’m honest I have to admit it can be a struggle. But the truth is that deep down inside this kind of stuff churns around like a piece of rotten food that just won’t settle. You know it’s just not right. 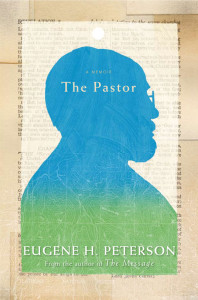 As I mulled that over, I remembered that Derek Melleby had lent me his copy of Eugene Peterson’s memoir, The Pastor, a few months ago after we had one of our many conversations about this very topic. Derek, I’m sorry that the book has been sitting on my desk since then. It’s been a few months. But I remembered today that you bookmarked a page containing a letter Peterson once wrote to a pastor friend who was leaving his current church to lead a “more promising” congregation that was three times the size. I read that letter today and it felt like a good dose of stomach-settling stuff. I thought I would pass it on in its entirety:

I’ve been thinking about our conversation last week and want to respond to what you anticipate in your new congregation. You mentioned its prominence in the town, a center, a kind of cathedral church that would be able to provide influence for the Christian message far beyond its walls.Did I hear you right?

It is also the kind of thing for which we have abundant documentation through twenty centuries now, of debilitating both congregation and pastor. In general terms it it the devils temptation to Jesus to throw himself from the pinnacle of the temple. Every time the church’s leaders depersonalize, even a little, the worshiping, loving community, the gospel is weakened. And size is the great depersonalizer. Kierkegaard’s criticism is still cogent: “the more people, the less truth.”

The only way the Christian life is brought to maturity is through intimacy, renunciation, and personal deepening. And the pastor is in a key position to nurture such maturity. It is true that these things can take place in the context of large congregations, but only by strenuously going against the grain. Largeness is an impediment, not a help.

But a crowd destroys the spirit as thoroughly as excessive drink and depersonalized sex. It takes us out of ourselves, but not to God, only away from him. The religious hunger is rooted in the unsatisfactory nature of the self. We hunger to escape the dullness, the boredom, the tiresomeness of me. We can escape upward or downward. Drugs and depersonalized sex are a false transcendence downward. A crowd is an exercise in false transcendence upward, which is why all crowds spiritually pretty much the same, whether at football games, political rallies, or at church.

So why are we pastors so unsuspicious of crowds , so naive about the false transcendence that they engender? Why are we so knowledgeable in the false transcendence of drink and sex and so unlearned in the false transcendence of crowds? There are many spiritual masters in our tradition who diagnose and warn, but they are little read today. I myself have never written what I really feel on this subject, maybe because I am not entirely sure of myself, there being so few pastors alive today who agree. Or maybe is is because I don’t want to risk wholesale repudiation by friends whom I genuinely like and respect. But I really do feel that crowds are a worse danger, far worse than drink or sex, and pastors may be the only people on the planet to encourage an imagination that conceives of congregations strategically not in terms of its size but as a congenial setting for becoming mature in Christ in a community, not a crowd.

Your present congregation is close to ideal in size to employ your pastoral vocation for forming Christian maturity. You have talked about “multiplying your influence.” My apprehension is that your anticipated move will diminish your vocation, not enhance it.

Can we talk more about this? I would welcome a continuing conversation.

The peace of Christ,

I think size does indeed matter in ministry. . . but maybe not in the ways that we think it does.