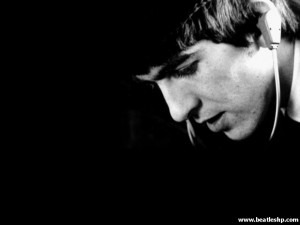 A few weeks ago I was chatting with my friend Steve Rabey when he made a very bold statement that I’m not sure I bought, but that I’ve been thinking about ever since. I have to be careful what I say. After all, Steve is the editor over at Youthworker Journal and I have to pass my regular culture column through him every two months.

So Steve tells me that he’s just finished writing a piece on George Harrison. Then, he tells me that he believes that no other musician has addressed themes of spirituality with greater consistency and intent over the last fifty years than George Harrison. I wasn’t able to disagree on the spot, although a flood of names started passing through my brain, each of them possible challengers to Steve’s theory. I’ve been pondering the claim since then. To be honest, I wanted to agree. After all, nobody has influenced the shape of music since 1960 like the Beatles. . . collectively and individually. If you weren’t around when the Beatles first showed up, you have no idea. Just ask your parents. Honestly, there’s been nothing like them since. In a world bursting with musical choices, it’s nice to be able to sit back and say “I remember,” while hearing the influence of the Fab Four in just about everyone and everything musical these days. The 1960s were an amazing time in pop culture history.

After reading Steve’s article – “How George Harrison Changed the Way We Believe” – I have to admit that Steve’s bold statement was probably justified. In fact, Steve writes, “Harrison was the most explicitly and consistently theological rock star of the last half-century.” Please give the article a read. Three things that Steve wrote really jumped out at me. . .

First, there was Harrison’s interest in Eastern Spirituality and Hinduism opened the curtain for all of us to a world that we really didn’t know existed. We were ushered into that world by Ravi Shankar and his Sitar. I remember how weird and abrupt it all seemed and sounded. . . like an old friend (The Beatles) had just gone through a complete makeover. Steve tells us that Harrison knew that drugs weren’t enough to answer his yearnings. Thus, his journey to the east. Harrison was pop culture’s “exhibit A” in the evidence locker that pointed to the Apostle Paul’s universal “groans” of Romans 8. We were, indeed, made for God.

Second, there was Harrison’s recognition of the disjointed hypocrisy in the American church. Sure, Harrison was looking for something more than his experience of the Catholicism of his youth. But his assessment holds true today. When he was in Bombay he said that “the difference over here is that their religion is every second and every minute of their lives.” We don’t only yearn for God. The relationship we yearn for with God is a fully integrated relationship that touches every nook and cranny of life. Sadly, Harrison might even be more accurate in his comparison today.

Finally, Steve’s article reminded me of the sad day when I heard that the Beatles had broken up. It was early in the morning and I was standing at the bus stop waiting for the school bus to pick me up for another monotonous day at Huntingdon Junior High School. 8th grade to be exact. I can still remember Steve King walking quickly to our stop from his house. He was about 100 feet away from us when he asked us, “Did you guys hear about the Beatles?” Then, he broke the news. It was appropriate that this talented young drummer in a band fronted by his older brother was the one to break the news. After all, these two guys were the first in our neighborhood to emulate the Beatles in their haircuts and dress. The news he broke broke us. Turns out, there was nothing at all monotonous about that day. Steve Rabey’s article mentions the last song the band ever recorded: “I Me Mine,” a critique of narcissism written by Harrison that continues to describe a growing condition in our culture today, over forty years later.

So. . . thanks to Steve Rabey for his statement, his article, and for allowing George Harrison to say things that challenge me in my Christian faith once again.