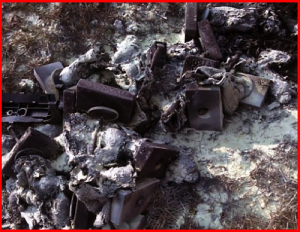 So my nephew – who was a pretty decent football player himself a few years ago – texted me this morning. “Google new canaan football team burns trophies.” My nephew lives in Connecticut near New Canaan, which is how he caught wind of this crazy little story that’s a sign of the times.

Here’s the story. . . . It seems that the New Canaan Black 8th grade football team made the playoffs. They reached the semi-finals but lost. That left them in third place. A few weeks after season’s end, the team had a little party at one player’s home. The players’ parents decided to celebrate the team’s season and success by presenting their boys with trophies. . . third place trophies. The coaches then gathered the boys up and took them and their trophies to a local park, where the coaches then proceeded to have the boys burn the trophies. All three coaches lost their jobs after the incident went public. One coach apologized, saying the message they intended to send was positive one. Residents of the town are concerned that the message that was sent was all wrong – that not finishing first is the same as failure.

As I think about this story, there are a couple of things to ponder here. As a parent of kids who were athletes and as someone who coached for years, I value a positive athletic experience. Athletics is about learning, putting forth an effort, cooperation, and having fun. I never believed that “winning is the only thing.” I know there are coaches that scream, yell, and coach for nobody but themselves. Not good.

On the other hand, we live in a world where kids are coddled, hovered over, and buffered from consequences by parents who are far too child-centered. Everybody needs to get a trophy, a pat on the back, and a “you’re awesome!” even when the effort is mediocre or sub-par. Not good as well.

So, while I don’t fault the parents in this story (I don’t really know. . . I wasn’t there nor do I know the families), it does serve as a reminder that 1)we’ve placed too high a premium on winning, and 2) we coddle our kids way too much. Both are threads running through the fabric of today’s youth culture. In this story the threads cross. . . and look what happened.

What do you think?

Next week I’ll blog a little “show and tell” on the trophy that I proudly display on my desk.