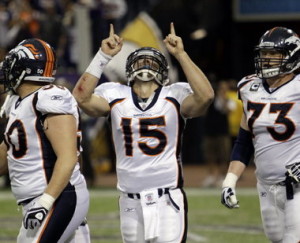 Am I alone in thinking that Tebow-mania was getting out of hand? Am I the only one that wanted it to stop? How can I say that? What’s wrong with me?

I’ve been watching and listening as the media world and the church have been obsessing over Tim Tebow and his last-minute heroics over the course of the last few weeks. With each victory, the frenzy grew. As I’ve watched, I’ve tried to process what I’ve been seeing through theological and cultural lenses. I’ve come to a few scattered conclusions that I’d love to develop further in the coming weeks, but let me pass on some observations.

1. Tim Tebow is an incredibly gifted athlete. No clarifier or explanation needed here.

2. Tim Tebow is a gifted leader. He’s proven that at a variety of levels. You have to be a good leader to be an NFL quarterback and to get your team behind you in the way that Tebow has. Right now, those leadership abilities have combined with his athleticism and talent in a combination that has him right where God wants him to be. . . for right now. Who knows where the journey will end for Tim Tebow.

3. Tim Tebow has been fun to watch. We all love the “Rocky” stories, don’t we? This has been a little bit like that. I, for one, have enjoyed it.

4. Tim Tebow may not be a conventional NFL quarterback, but for now, he’s the Denver Bronco’s quarterback. The critics need to leave the guy alone and let him play. Just because he doesn’t play the way others who have gone before have played, doesn’t mean he can’t play the way he can and does play. Make sense?

5. Tim Tebow got his talent from God. . . just like every other professional athlete out there. Tim Tebow’s athleticism is no more and no less a gift from God than the athleticism of a guy like T.O. . . . really. Just because one guy is more of a gentleman, good sport, and role model than the other. . . well. . . that doesn’t make his athleticism more of a gift than the athleticism of the other. I say that because many of my Christian brothers and sisters seem to have forgotten that. Watching either (or all for that matter) run, jump, tackle, catch, pass, etc. . . . any and all athletic ability “sings” praises to the Creator of athletic ability.

6. Tim Tebow verbally and consciously gives glory to God. That’s the way it should be. We can celebrate and learn from that.

7. Tim Tebow has become the Christian celebrity du jour. . . and that’s not a good thing. Sure, it’s nice to have followers of Jesus talk about their faith in ways that the world can see. But I’m always afraid that we church people latch on to stuff like this too much, too soon, too loudly, and with way too much enthusiasm. That’s why I’m glad Tim Tebow lost yesterday. We need to stop the Christian celebrity thing. We need to stop wearing the Christian celebrity as “our guy.” We typically do that with a chip on our shoulder and it’s really not very attractive. Not only that, but when we adopt all the lingo (“tebowing,” etc.) I think it tends to trivialize and cheapen our faith.

8. God doesn’t need Tim Tebow, he doesn’t need me, he doesn’t need any of us. Really. God is the sovereign Lord of the universe. He is in control. He is working out His will. We need to know that will and humbly ask Him to use us as He sees fit as He reveals His Kingdom in us and through us. But let’s never forget. . . we are flawed human beings. Sometimes we win. Sometimes we lose. That keeps us in our place.