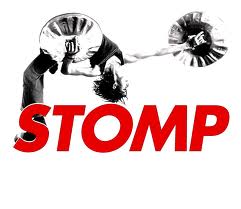 The same thing happened to me the last time we went to the show. This morning, I wanted to go out into my garage and start banging on anything and everything. I was also thinking about the chaos that is our world and our calling to bring beauty and order where ugliness and disorder abound.

Sadly, my attempts to put my own little STOMP performance together would be an epic fail. STOMP is all about rhythm and dance. I’m no good at either. But the traveling troupe we saw perform the show last night is incredibly gifted. I watched in wonder and awe at the talent, the order, and the way the show has developed since we first saw it over 10 years ago.

If you haven’t seen STOMP, you should. As a Christian, the show serves as a powerful visual and aural reminder of what God is doing in the world, along with the calling He’s placed on our lives to be His Kingdom representatives. His story is being worked out. . . Creation. . . Fall. . . Redemption. . . and one day, Restoration! STOMP takes elements of the fallen created order. . . things that appear to be castoffs and garbage. . . and “redeems” them as the characters embrace them in rhythmic precision. Order comes out of chaos. It’s a strong reminder of who we are to be as God’s people in every nook and cranny of our world and lives. Not only that, it’s incredibly fun.