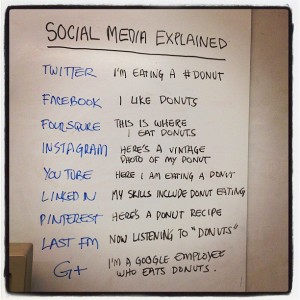 I spotted this thought-provoking photo on Facebook this morning. It made me laugh. It’s a tutorial on the differences between a variety of social media platforms. It’s clever. It’s somewhat accurate. It’s also quite telling. Some questions. . .

1. Why would I EVER want to tell you that I’m eating a donut??? If I think you and the rest of my “followers” need to know. . . well . . . then there’s something wrong with me. Of course, because my wife is concerned about my health and what I eat, then telling my “world” would be risky business. Word might somehow get back to her. But that’s not the real issue. The real issue here is that I might think I need to tell others, that others might need to know, and that somehow it all matters in the larger scheme of things that this information is necessary to share.

2. Why would you EVER want to know that I’m eating a donut??? Seriously. Do people sit around waiting to hear this stuff? In a world characterized by information overload, this is pure fluff. In a world where we hurry here there and everywhere, do we need to carve out time to look for and absorb this kind of meaningless trivia? And if you and the rest of my “followers” need to know. . . well . . . then there’s something wrong with you.

3. What’s your “donut?” What’s my “donut?” In other words, since we’ve got people watching, are we saying things to gain and keep their attention? . . . Are we saying things to gain and seek validation and approval? . . . Are we saying things to somehow stake and keep our claim for attention? Or, are we saying things because they must be said? You and I need to be careful about this, don’t we? When I dig down deep inside I know that there are things I put out there to gain the approval of others, to brag something up, or to maintain a “following.” When I post about a child’s achievement. . . or how fast I ran my last mile. . . or an award I received. . . I should be looking deep down inside to evaluate and ponder what’s really going on. And once I see it for what it is, then I need to stop going to the “Donut shop.”

Hey. . . there’s nothing wrong with Social Media. Let’s use it, and use it right. Using it right means using it redemptively and to the glory of God. . . not to the glory of self.

Perhaps you need to be a digital immigrant (as opposed to a digital native) to really understand the comparison to days past. Does anyone who grew up pre-social media remember a time when before, during, or after doing anything/everything in the course of a day you would pause, step outside, and shout out what you were doing at the top of your lungs? Or you would go to the neighbor’s house, knock on the door, and announce what you were doing, had done, or were about to do? No, of course not. We would have thought there was something very, very wrong with people like that!

Which leads me to wonder about what we’ve become. . . .